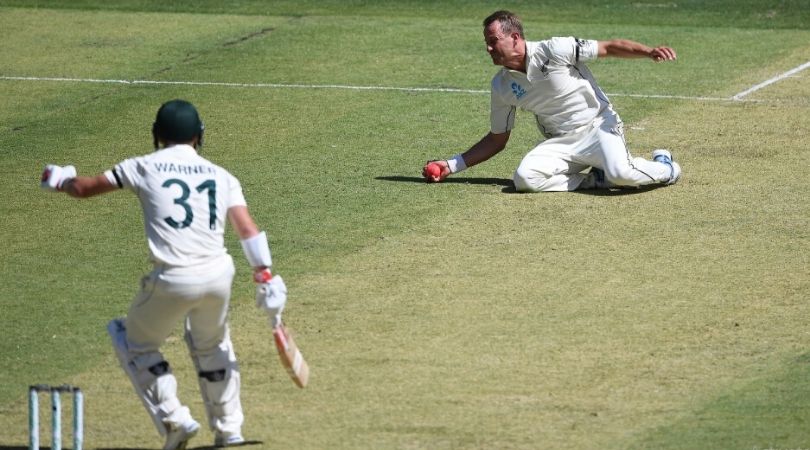 On Thursday, New Zealand pacer Neil Wagner grabbed a fine caught-and-bowl to dismiss David Warner. Australia and New Zealand are currently playing the first match at Perth, of the ongoing three matches Test Series. Meanwhile, on the first day of the pink ball test, Wagner bowled a low full toss and Warner could not time it to perfection. And Warner’s bat tuned in his hands then the ball went back to the bowler. Wagner who was in follow-through took a stunning catch diving to his right.

It was a crucial wicket for New Zealand as David Warner was in tremendous form. He had scored 489 runs in two innings in the last two matches against Pakistan. Meanwhile, the left-handed batsman scored unbeaten 335 runs in the second Test match against Pakistan. And now Warner was once again looking dangerous as he scored 43 runs with help of four boundaries before getting out in the hand of Neil Wagner.

It all happened in the fourth ball of the 25th over of Australian first innings. The Southpaw pacer bowled a fuller delivery and Warner mist hit the ball in ends the ball went back to bowlers hand. It was a stunning catch as the bowler was in the follow-through. Here we are sharing the video of the incident at the bottom of the article.

Earlier in the match, after winning the toss, Australia opted to bat first. For the first wicket, David Warner and Joe Burns added 40 runs. In the 13th over of the innings, Colin de Grandhomme dismissed Joe Burns when he was only at the score of 9 off 42 balls. Thereafter, David Warner got dismissed at the score of 43 in hand of Wagner as he took a stunning catch. At the end of the first day, Australia was on 248 for the loss of four wickets. Marnus Labuschagne scored unbeaten 110 runs off 202 balls.