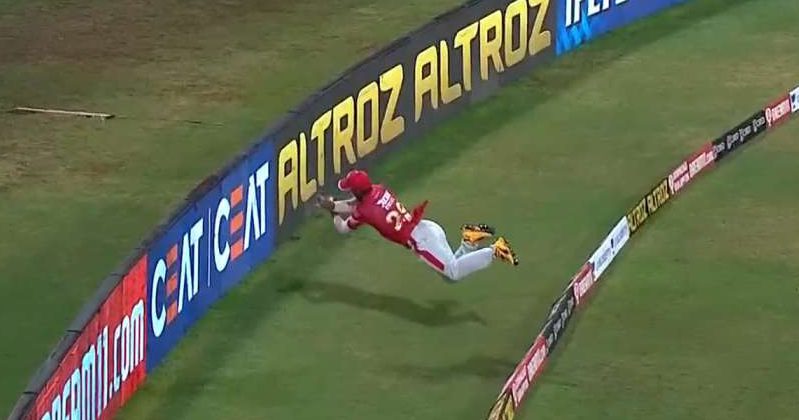 Fans couldn’t have asked for a more exciting weekend blockbuster than Sunday’s IPL fixture between Rajasthan Royals and Kings XI Punjab. The two sides engaged in a sensational run-fest over on the Sharjah Cricket Stadium and its short boundaries; with as many as 5-batsmen across both sides notching up 50+ scores. In the end, though, it was Rahul Tewatia and his stellar, death-over pyrotechnics, that took the Royals home by six-wickets.

Aside from the countless batting records broken- of which there were many- the match produced, arguably, one of the finest fielding efforts in the tournament’s 13-year-long history. Certainly the best we’ve seen in this season so far; we are, of course, talking about Nicholas Pooran’s acrobatic save that saved Punjab a certain six and kept them into the match.

It happened during the 8th over of RR’s run-chase. Sanju Samson, continuing on his stellar form from the last match, smacked leg-spinner Murugan Ashwin square on the leg-side. The shot looked powerful enough to clear the boundary ropes and sail past Pooran, the fielder stationed at deep mid-wicket.

Nicholas Pooran pulls off a stunning save.

But Pooran had other plans; plans that defied the very forces of nature, as he perfectly timed his jump to catch the flying ball single-handedly. Unfortunately, the momentum from the running-dive forced him to fall inside the boundary ropes. Pooran, however, wasn’t done showing his superb presence of mind yet; just before making ground-contact, he backhanded the ball back inside the ropes to save his side some extra runs. Glenn Maxwell then deftly collected the ball from the ground and lobbed it back to the bowling end. A sure-shot six for the Royals ended up fetching only 2-runs, thanks to Pooran’s stellar brilliance.

Unsurprisingly, the save Garnered Pooran much praise and acclaim from his fans and teammates. The likes of Maxwell, Murugan, and captain KL Rahul all acknowledged his efforts through some passionate clapping. Kevin Pietersen and Simon Doull, who were doing live commentary at the time also seemed quite livid; Pietersen going as far ahead as to claim, “That’s the best I’ve seen!”.

More importantly, though, Pooran would be pleased that his efforts impressed his fielding coach- the legendary Jonty Rhodes. Shortly after the save, the broadcasters aired a montage comparing Pooran and Jonty’s reaction frame-by-frame. The Punjab fielding coach made no attempts at hiding his amazement; he stood up to offer his star player a standing ovation. Once play resumed, he even dedicated a small, respectful bow to Pooran. Here’s the video: