Watch: PAK Women’s batter Nida Dar pulls out after bowler releases the ball; Netizens give her Out

Nida Dar had taken the stance but pulled out at the last moment. Ball hit the stumps but she was given not-out. 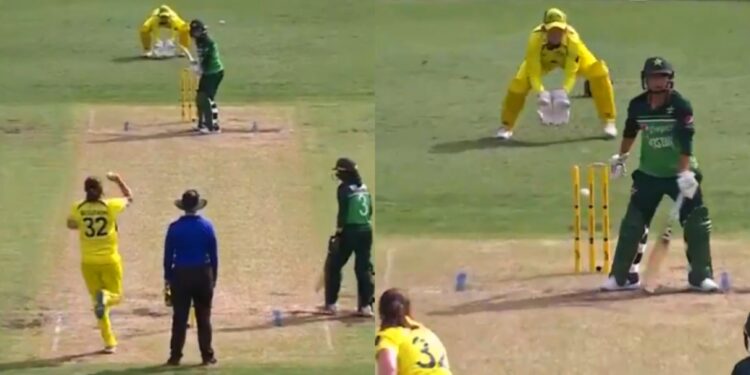 In the third ODI between Australian women and Pakistan Women, a controversial incident happened. Watch: PAK Women’s batter Nida Dar pulls out after bowler releases the ball; Netizens give Out.

Australia Women’s put on a show when they batted first in the 3rd ODI against Pakistan. Beth Mooney’s splendid ton and Lanning’s brilliant 72 guided Australia to a huge total of 336 after the 50 overs at North Sydney Oval.

In reply Pakistani top order got out cheaply after getting starts against the high-quality bowling attack of the Aussies. Pakistan was 111/2 when the controversial incident happened in the batting end while Tahlia Mcgrath was bowling her first over of the spell.

During the 27th over of the second innings Nida Dar left the ball coming towards her after Mcgrath released the ball. Netizens along with the commentators claim that Nida was too late to pull out and she must be given out by the umpires. Though the umpires thought otherwise and signaled a dead ball.

Out or not out?
pic.twitter.com/RWOhczvJYI

The ball was clearly halfway down when Nida decided to pull out. The commentator also said that Nida must have thought that this ball is just too good to face. Fans have also expressed their opinion on the incident on Twitter.

One of the users on Twitter said “Just pull out when you think you can’t play one now? Out all day”

On the other hand, a Twitter user was on the side of Nida stating “There’s nothing in the rules that stops you from pulling out as late as possible. So according to the rules, it’s NOT OUT”

Even after the cryptic decision given not out by the umpire when Nida was on 5 runs didn’t do much damage to Australia. Nida was caught out on Sutherland’s delivery after only making 29 runs. Pakistan women only managed to score 235 runs in the 50 overs with the loss of 7 wickets.

Australia won the match with 101 runs at the end and sealed the ODI series with a scoreline of 3-0.