Zainab was interviewing one of the coaches, just when an MI Cape Town fielder collided with her. 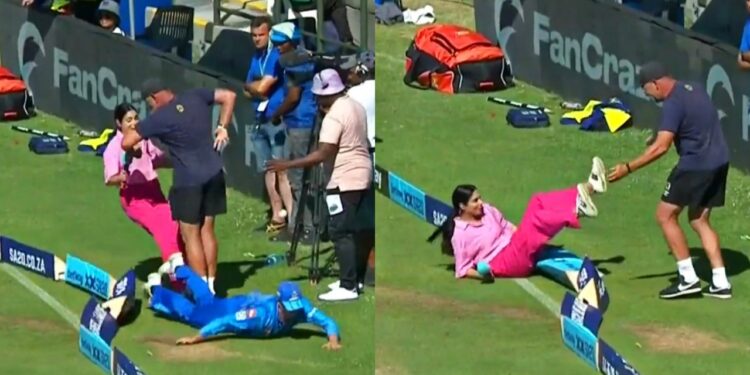 South Africa’s T20 league SA20 is getting all the attention in its first edition from the cricket fans across the globe as it has got some of the most prolific cricketers participating in the league.

On January 18, during the game between Sunrisers Eastern Cape and MI Cape Town, a terrible incident took place as a fielder collided with anchor Zainab Abbas in an attempt to save a boundary.

Sunrisers Eastern Cape’s all-rounder Marco Jansen looked in supreme touch with the bat in the game against MI Cape Town as he smashed 66 runs off just 27 deliveries including 3 boundaries and 7 sixes. However, one of Jansen’s boundary shots led to a terrible incident in the game.

The coaching staff helped Zainab as she immediately stood up as she didn’t hurt herself in the process. She looked fine after the terrible incident as she said in a cheerful manner,”It seems like we are Ok, we’ve survived.”

"This is coming straight for us.." 🫣@ZAbbasOfficial, you good? 🤣@CapeTownCityFC your manager somehow avoided the contact! pic.twitter.com/32YPcfLCMf

Jansen who went all guns blazing against the Cape Town bowlers didn’t show any mercy to star spinner Rashid Khan as well. He even hammered MI Cape Town skipper Rashid Khan for 28 runs in just one over as he put all the pressure back to MI Cape Town after they had a great start with the ball.

Marco Jansen’s heroic knock helped the Aiden Markram-led side emerged victorious after they had lost 5 wickets in a quick succession while chasing a target of 172 runs. Sunrisers Eastern Cape chased down the total with three balls remaining and grabbed their second victory of the season.