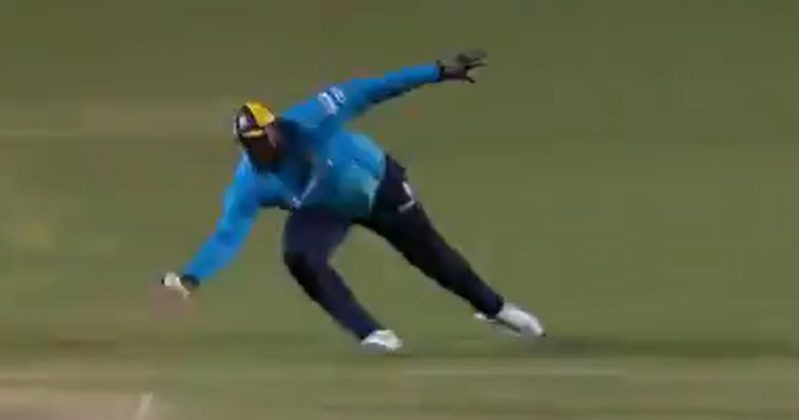 Wednesday’s Caribbean Premier League (CPL) semi-final between Guyana Amazon Warriors and the St. Lucia Zouks ended in a rather one-sided fashion. The latter cruised away to an effortless, 10-wicket win and booked a spot in the finals against the rampaging, Trinibago Knight Riders (TKR).

The spin-troika of Mark Deyal, Roston Chase, and Zahir Khan all came to the party and skittled the opposition out for just 55-runs- the second-lowest in the tournament’s history. Winning was, but a mere formality for the Zouks; one to which Deyal, and his co-opener, Rakheem Cornwall duly obliged. The latter arrived at his brutal best, creaming 32 runs off 17-balls to polish the chase off in just 4.3 overs. Talk about a big-man beatdown!

But turns out, Rakheem’s blistering batting wasn’t the only aspect that stirred fans’ attention. During Guyana’s batting innings, the burly Antiguan all-rounder claimed a stellar catch of Imran Tahir at first-slip that sent social media on a frenzy. Well, more specifically- a nostalgia frenzy. Fans instantly connected Rakheem’s one-handed screamer to Namibian bowler, Dwayne Leverock’s stunning effort against India in the 2007 World Cup. Some of them even compared the two catches!

I had forgotten that man! Oh yeah, Rakheem Cornwall is just the new Dwayne Leverock

What a Catch Cornwall #GAWvSLZ

Cornwall's catch was the second best fatman catch of all time. Dwayne Leverock has the 1st