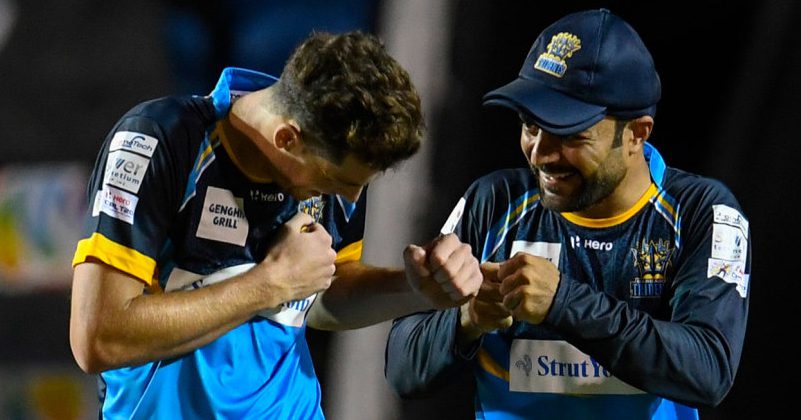 The return of the long-awaited Caribbean Premier League (CPL) has returned some much-needed fiesta-flavor to the Gentlemen’s game. The second match of the season saw Afghan leg-spinner, Rashid Khan, turn up the decibel levels at an empty, Brian Lara Stadium; courtesy of some sensational, all-round performances in Barbados Tridents’ clash against the St. Kitts and Nevis Patriots.

Put in to bat first, the Tridents started slow, losing their top-three batsmen in the powerplay itself. It was a solid, 61-run partnership from skipper Jason Holder (38 off 22) and Kyle Mayers (37 off 20) that brought their innings back on track. Some late cameos from Mitchell Santner (20 off 18) and Rashid (26 off 20) took the Tridents total to a respectable, 153-9. Meanwhile,  Sheldon Cotrell, Sohail Tanvir, and skipper Rayad Emrit starred for the patriots; each picking up 2-wickets at an economy rate under 7.

It was during his bowling stint, though, when Rashid came up with his most memorable performance from the night. Coming fresh into his bowling-spell, Rashid lobbed a half-volley at Patriots’ Joshua Da Silva; who looked eager to clobber it straight down the ground. His shot crashed straight onto the non-striker-end stumps, instantly shutting any likely, run-scoring opportunities.

But Joshua’s partner at the bowler’s end, Evin Lewis, was a bit late to realize that; and tried to sneak in a cheeky-single. But that turned out to be his undoing, as Rashid made a lightning-quick beeline for the ball and the stumps. Lewis did try getting back to his crease- but Rashid’s ‘Usain Bolt’ like running thoroughly outdid him. There was a slight confusion if the bails were properly dislodged, but the final decision came in the bowler’s favor. Here’s the video of the dismissal:

Quick hands by @rashidkhan_19 produces a spectacular run out and is our Googly Magic Moment from match 2. #CPL20 #BTvSKP #CricketPlayedLouder pic.twitter.com/xLrF4Fm1PN

As for the match, Joshua went on to score 41, and partnered Ben Dunk (34 off 21) in a solid 50-run partnership. But some miserly bowling from the Tridents’, particularly from Holder (21 off 4 overs) and Santner (18 runs, 2 wickets and a maiden of his 4) kept their scoring rate in check. In the end, they fell short by 6-runs, giving the Tridents their opening 2-points of the season.