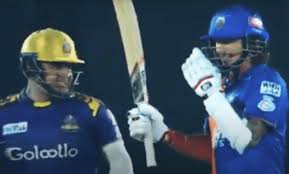 Azam, son of legendary Pakistani ‘keeper-batsman Moin Khan, was minding his usual business behind the stumps. Steyn walked into bat during the 17th over of Kandy’s innings after they lost their 7th wicket. Gloveman Azam had some interesting quips for new-comer Steyn- but not quite what one might have expected.

“Sir, you know I’m a fisherman too,” the 22-year Azam informed Steyn rather casually while keeping. Steyn-gun’s fishing exploits have become quite popular in recent times; especially after he modelled his new celebration style on a fish-reeling action.

Meanwhile, the ice-cool 37-year-old South African pacer had a rather candid reply to the young keeper’s comments. “Really?”. The whole episode left the on-air commentators in splits, and provided a big entertainment moment. Here’s the video:

Azam Khan – Do you know I’m a fisherman too

But it doesn’t just end here. Right after the match, Steyn and Azam got together in the pavilion and compared their ‘big catch’ stories. Azam even managed to impress the Gun with an impressive 110 Kg Marlin’s picture! The two had a passionate chat about how the lockdown has affected the current fishing situation. In the end, they made a promise to catch up together fishing the next time they’d meet. Talk about wholesome!