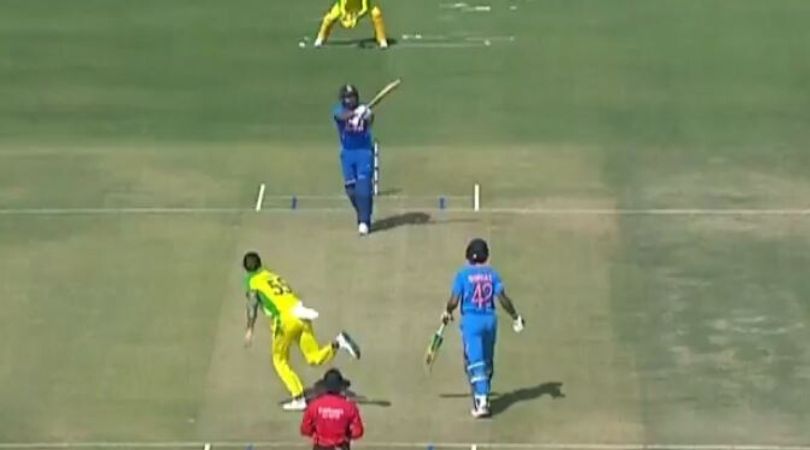 Rohit Sharma Hits Tennis-Forehand Style Boundary Against Australia: India and Australia are currently playing three matches of ODIs series in India. Earlier in the first match of the series at Wankhede Stadium in Mumbai, Australia has beaten up the hosts by 10 wickets. And now both the teams have moved to Rajkot to play the second match of the ODIs series. Team India certainly looking ahead to level the series and then will try to clinch the series with 2-1. On the other hand, Australia will try to make a series win against India in India by winning just 1 one match of the remaining two.

During the first innings of the second ODI match at Saurashtra Cricket Association Stadium in Rajkot, Indian openers Rohit Sharma and Shikhar Dhawan have given a decent start. Meanwhile, for the first wicket, they both have added 81 runs before Rohit gets out in the 14th over of the innings. Amidst of all, in between the innings, when Rohit decided to accelerate the inning, he hit a Tennis Forehand style boundary.

It all happened in the 13th over of the innings when Kane Richardson delivered a poor length ball which Rohit obviously punished. The explosive batsman came ahead from the crease and slapped the ball to the boundary while stepping out his crease. The shot was surely a visual treat as many started calling it as a ‘Tennis-Ball’ shot.