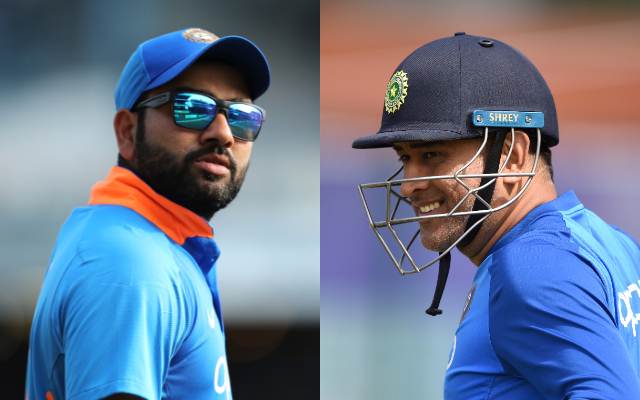 The uncertainty surrounding former India captain MS Dhoni’s international cricket career has always been a big talking point among his fans. Ever since that one fateful quarterfinal appearance against New Zealand in the World Cup semi-finals last-year; the wait, of watching MSD make his much-anticipated return to cricket has been frustratingly long. And right when it seemed to be nearing an end with the upcoming edition of the IPL; enter COVID-19, effectively rendering the chance of watching ‘Captain Cool’ back in action moot for quite a while.

Thankfully, his teammate Rohit Sharma seems to have caught on with the desperation of Dhoni fans; and come up with a solution for their problems. On Thursday, Rohit took to his Instagram account to engage in a public live-chat with his former Mumbai Indians teammate Harbhajan Singh. The couple discussed a variety of things concerning cricket; ‘Bhajji’ opened up about his experience thus far in his new IPL franchise (Chennai Super Kings), and revealed some of the key differences between how both the teams functioned. Further, he opined that the current Indian batting line-up had become overdependent on Rohit and captain Virat Kohli.

“Back during my playing days, we had a lot of trust and belief. Nowadays, if we lose our top three early, then we have problems in winning matches,” Harbhajan observed. ” We need to find more watch winners. Think about the World Cup, our team topped the group stage because you (Rohit) and Virat consistently performed. But then the one time our top order fails to come through, no one stood up to the task. We could’ve won the World Cup if at least 3-4 guys played more consistently,” Bhajji concluded.

Their conversation reached a somewhat lighter note at one point, when the ‘Turbunator’ mentioned some of the questions fans frequently bombarded him with. “Everyone keeps asking about Dhoni, whether he’ll play again or not. I say I don’t know, but personally, I don’t think he wants to make an international comeback.”

Rohit, seemingly not a stranger to the question, candidly replied that neither he, nor any of his teammates about Dhoni’s future. Rohit explained that Dhoni ‘goes underground’ when he is not in the team; so none of the players could comment on his stance. When he is not playing cricket, he goes out of the radar. He goes underground”. Rohit concluded by urging fans to find Dhoni the moment the lockdown ends, and have all of their questions answered directly. “You can’t go now but after the lockdown, you take a car, bike or flight go to his place and ask him ‘What are you going to do? Will you play or not?”

With #MSDhoni not being forthcoming about his future plans, #CSK teammate #HarbhajanSingh speculates that the former captain might not turn up in India colours again#RohitSharma #TeamIndia pic.twitter.com/u8djhqFdtW