Watch: Ruturaj Gaikwad schooled by netizens for disrespecting a groundsman in 5th T20

Fans aren't happy with the way Ruturaj treated a ground staff member who tried to take a selfie with him. 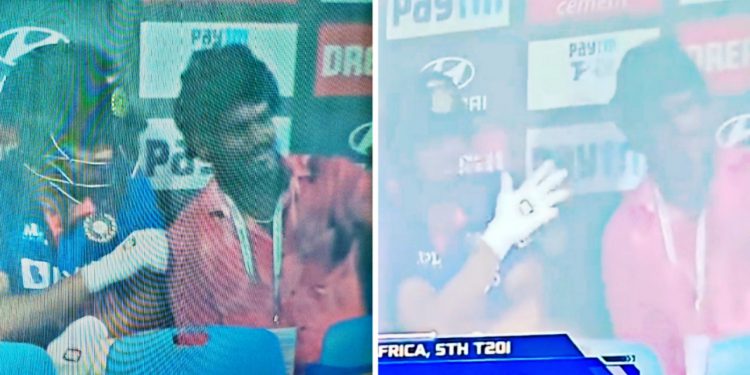 Rain played a spoilsport in the decider of the India vs South T20 series at Bengaluru. The match was stopped when India were on 28 runs in 3.3 overs and had lost both their openers Ruturaj Gaikwad and Ishan Kishan. There wasn’t much to talk about about the 5th T20, however, a video of Ruturaj Gaikwad is surfacing on social media where he can be seen mistreating a groundsman.

The incident happened when the batter was sitting on the Indian dugout waiting for rain to stop. Meanwhile, a ground staff member finds an opportunity to get clicked with the Indian opener. The groundsman sat beside Ruturaj and tries to take a selfie. However, the 25-year old batsman didn’t like it as he pushed the groundsman and asked him to maintain a distance. Some people supported Rutu’s response as they felt he did it due to bio-bubble protocol. However, in the ongoing series, BCCI has given the freedom to players as they are not in a bio-bubble.

The video grabs netizens’ attention who were quick to school Pune-born cricketer. Fans felt Ruturaj Gaikwad’s act was disrespectful and a player shouldn’t treat fans the way he did. Some fans remind him about his CSK skipper MS Dhoni who respects his fans even after they invade the ground to meet him. Here are some reactions of Twitteratis.

Ruturaj Gaikwad showing attitude while taking selfie with 'groundsman' not anyone can treat everyone equal like Rohit Sharma ❤️#INDvSA #IndvsSa pic.twitter.com/6zoZzOaJdR

Gaikwad couldn’t grab the best out of South Africa series

In the absence of KL Rahul, and Rohit Sharma, it was an opportunity for Ruturaj Gaikwad to leave a mark. However, he hasn’t got the best out of the 5 matches he played. Ruturaj could score 96 runs in this series with one fifty in his account. On the other hand, his counterpart Ishan Kishan fared well as he ended as the highest run-scorer of the series with 206 runs.

Both India and South Africa shared the trophy as the series ended in 2-2 draw. Bhuvneshwar Kumar was named ‘Player of the series’ for taking 6 wickets in 5 games including a four-fer. Now Indian team is set to face Ireland on their soil in a 2-match T20I series.