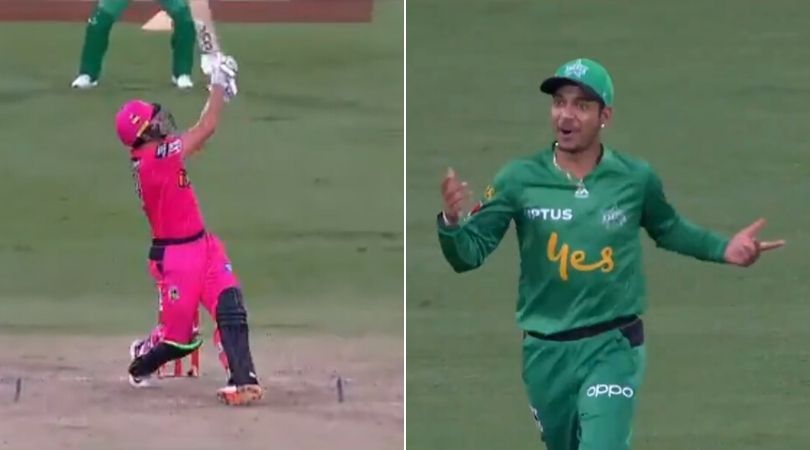 On Monday, the 45th match of the ongoing Big Bash League 2019-20 has been commenced between Sydney Sixers and Melbourne Stars. Meanwhile, during the first innings, Melbourne Stars players Sandeep Lamichhane and Seb Gotch were left looking in the air as the ball sailed into the boundary for a surprising six.

It all happened in the ninth over of the innings when Sydney Sixers captain Moises Henriques top-edged a delivery into the air from Lance Morris. Initially, it was looking at one of the fielders from both will comfortably going to take the catch. However, surprisingly the ball went for a six and Sandeep Lamichhane, who totally misjudged the ball, left completely to wonders.

The official twitter handle of Big Bash League has shared the video of the incident. They have added the video with the caption, “Absolutely no one had any idea where this ball was going …. A @KFCAustralia Bucket Moment | #BBL09.” Here we are attaching the video of the same at the below of this article.

Earlier in the match, after winning the toss Melbourne Stars opted to ball at Sydney Cricket Ground in Sydney. Meanwhile, in the first innings, during the fourth over the rain started to spoil the full game of 20 overs. Hence, thereafter when rain stopped, the game was reduced to 14 overs each side.

In the first innings of the match, Sydney Sixers could manage to score 143-4 at the end of the 14th over. From Sydney Sixers skipper Moises Henriques played a knock of 72 off just 31 balls and helped the team to set a huge target.

In the reply, Melbourne Stars could manage to score 125-2 at the end of the 14 overs. And hence lost the match by 21 runs with Duckworth Lewis method. From Melbourne Stars, Marcus Stoinis was the top scorer who scored 62 runs off just 37 balls.

Absolutely no one had any idea where this ball was going 😂