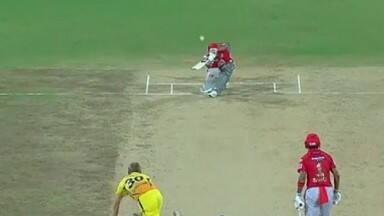 It was just a matter of time before CSK’s previously non-performing assets rediscovered their lost momentum. Opener Shane Watson proved exactly that, courtesy of a magnificent 53-ball unbeaten innings of 83 at the top. Faf du Plessis (87* off 53) superbly partnered him at the other end, yet again portraying his new-found role as Chennai’s ‘Mr. Dependable’. Their spirited 181-run first-wicket partnership helped the #whistlepodu brigade add 2-more points to their tally. The win leapfrogs from the bottom of the points-table to the sixth-spot.

A third defeat on trot further complicates matters for KL Rahul and his #wakhraquad. Of the three team-changes Punjab made for this game, two of them were supposed to aid their misfiring bowling attack. But unfortunately, neither could make much difference to the team’s dismal performance with the ball; both Harpreet Brar (4-0-41-0) and Chris Jordan (3-0-42-0) crossed the 10-runs-per-over threshold. With just one two-points to show from their five outings thus far, Rahul and his Punjabi paltan would be eager to regroup and sort things out before their next encounter- against the Sunrisers Hyderabad at Dubai on 8th October.

Despite all the forlorn, KXIP did have some positives to take from the batting front. though. For once, the team’s under-performing middle-order actually came to the fore and added some crucial runs towards the end. The likes of Nicholas Pooran, Glenn Maxwell, and Sarfaraz Khan all looked impressive during their brief batting stay at the death overs. Sarfaraz, in fact, even features as our pick for the playing the most stylish shot of the day.

It happened during the KXIP batting-inning’ final over. Shardul Thakur fired a full toss drifting down Sarfaraz’s leg-side; to which the 22-year-old Mumbai batsman reacted rather brilliantly. Sarfaraz smartly inclined his bat in a scooping-position- just in time, too; as he deftly elevated the ball over third man and deep backward point to collect a rather unconventional boundary. Seems like all those years spent with AB de Villiers at the RCB dressing room are finally rubbing off! Here, check it out on this video that IPLt20.com has wittily captioned as the ‘Sarfaraz Scoop’.