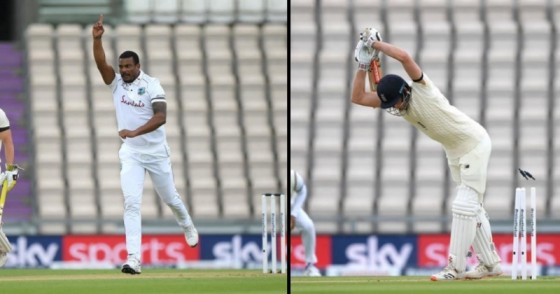 Fans all around the globe rejoiced in a passionate albeit quarantined hurrah yesterday as the gentlemen’s made its much-anticipated return. England and West Indies let the flood-gates open for cricket to make its comeback post its COVID-19 induced forced sabbatical. And they did that in style- well, Windies did, at least- as they offered fans a scintillating moment of on-field brilliance right within the first 10-deliveries of the test-match.

England’s stand-in captain Ben Stokes looked eager to make merry of the home-conditions at Southampton’s Rose Bowl and opted to bat first. Openers Rory Burns and Dominic Sibley led the hosts’ batting charge against Windies’ Kemar Roach. But it wasn’t until Trinibagian fast-bowler Shannon Gabriel came onto the scene that fans got a taste of some text-book, test-match bowling action.

Gabriel employes a smart-strategy to get rid off Dominic Sibley

Shannon commenced his over against Sibley by bombarding him with three consecutive out-swinging deliveries. Fourth delivery of the over; Shannon pitches yet another good-length angling delivery. Sibley seems to have anticipated the out-swinging pattern, hence he opts against playing the delivery. But that turns out be his undoing; as the ball sharply-angles inwards and knocks the bails off Sibley’s middle-stump.

Besides Sibley’s stunning dismissal, there wasn’t much cricket for the fans to savor, owing to frequent rain-interventions. Joe Denly and Burns spent most of the first day playing on a defensive mode against an unusually incisive Windies pace-bowling attack.

At the time of writing, England are batting on their second day with the scorecard reading 87-5. Gabriel, with figures of 10-1-38-3, is easily the pick of the Windies bowlers; with captain Jason Holder (10.3-4-19-2) and Roach (12-5-14-0) ably supporting him. England, meanwhile, would be eagerly be hoping for captain Stokes and new-comer Jos Buttler to lead their batting recovery.