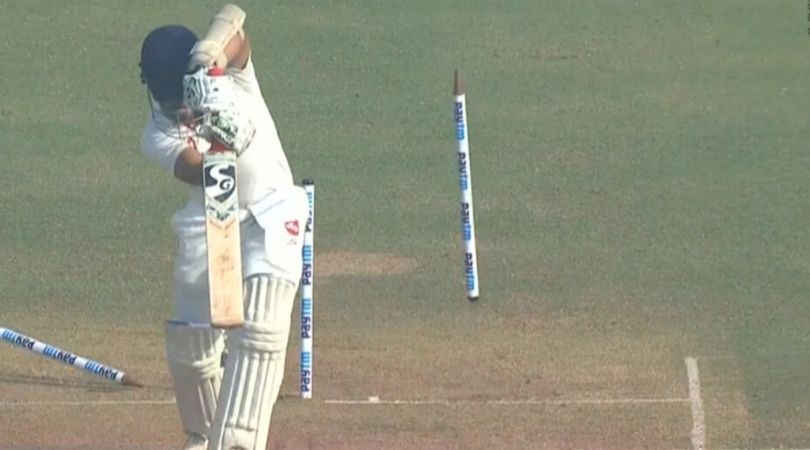 On Wednesday, Gujrat has beaten up Punjab team with a victory of 110 runs in the ongoing 86th season of the Ranji Trophy. Meanwhile, in the match, Pubjab’s pacer Siddarth Kaul bowled a beauty to Samit Gohel to dislodge the stumps in the air.

Punjab’s bowler Kaul has taken nine wickets in the match, however, unfortunately, bad luck was in the favour of Punjab throughout the match. During the third day of the match, Siddarth bowled a beauty to off the stumps while Samit Gohel was batting. However, the umpire’s decision to check for a no-ball saved the batsman as Kaul was found guilty of overstepping.

It all happened in the very first delivery of the over when Gujarat opening batsman Samit Gohel was absolutely clueless against a jaffa from Kaul. It was absolutely a brilliant delivery from the pacer, however, unluck made him bowl again the same delivery.

BCCI (Board of Control for Cricket in India) has shared the video of the incident on their official website. They have added the video with the title, “Samit Gohil’s lucky escape.” Here we are attaching the video of the same at the below of this article.

Short Summary of the Match (Gujrat vs Punjab, Ranji Trophy)

Earlier in the match, after winning the toss Gujrat decided to bat first at Sardar Vallabhai Patel Stadium in Valsad. Meanwhile, in the first innings of the match, Gujrat managed to score 281-10, thanks Bhargav Merai’s 130 runs knock. In the reply, the Punjab team could manage to score 229 before getting all out in the first innings. From the Punjab Anmol Malhotra scored a century to help the team in order to decrease the lead.

In the second innings of the match, Gujrat team score 167 before getting all out and with this set the target of 220 in front of the visitor’s team. In the reply, Punjab could score only 109 in the second innings and hence lost the match by 110 runs. Arzan Nagwaswalla awarded with “Player of the Match” 10 wickets in the match.

Here is the video (Siddarth Kaul Bowls A Beauty To Samit Gohel; Batsman Survives Despite Stumps Flying In The Air)