Dhananjaya looked set for a huge score before he found an unlikely mode of dismissal. 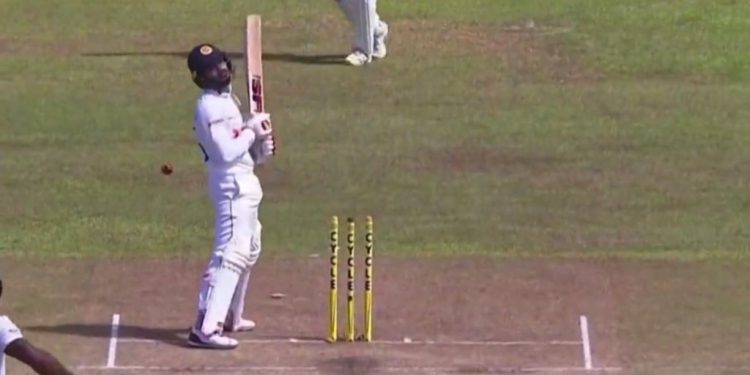 Hit-wickets in international cricket are a rare occurrence. However, such hasn’t really been the case in the last 12 hours. Recently, two batsmen have found themselves guilty of breaking their own stumps. First, it was Harshal Patel during yesterday’s match against New Zealand. And in a recent turn of events, Dhananjaya de Silva has joined him in the self-destructive crime.

The comical incident occurred during the first session of today’s play between Sri Lankan and West Indies. Dhananjaya de Silva was batting on 61 runs when Caribbean pacer Shannon Gabriel bowled him an un-harming back of the length delivery. While de Silva easily defended it with his soft hands, the ball went bouncing towards the stumps.

Dhananjaya de Silva turned around and tried waving his bat to stop the ball. Nonetheless, he missed out on his first attempt. In 2nd attempt, de Silva’s willow finally made contact. However, the contact which it made was not with the ball, it was with the stumps. Both the bails came out of their grooves and Dhananjaya’s knock came to a comical end as the crowd watched. The readers can see the funny dismissal below.

Not only was the end to his knock comical, it was premature too. de Silva was looking set for a huge score before he found this unlikely mode of dismissal. His 61 runs came off just 95 balls as he helped his team by stitching a hundred-and-eleven run partnership with Lankan skipper Dimuth Karunaratne.

The test match is being hosted at Galle International Stadium, Sri Lanka. Batting first, the hosts made an above-par score of 386 runs. Dimuth Karunaratne showed the way with his 147-run-knock while Nissanka and Dhananjaya played able allys. Both the batters contributed with crucial fifties.

Windies’ all-rounder and spinner Roston Chase chipped in with a fifer for just 83 runs and made sure that Sri Lanka didn’t run away with a heavy advantage in the 1st innings. Warrican took three wickets and Shannon Gabriel also struck a couple of times.