Australia faced England in the third ODI of the three-match series at the Melbourne Cricket Ground after gaining an unassailable lead of 2-0. 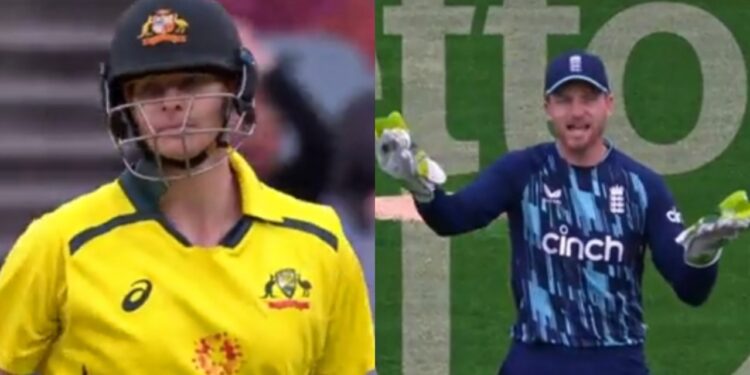 Australia faced England in the third ODI of the three-match series at the Melbourne Cricket Ground after gaining an unassailable lead of 2-0.

Australia’s Steve Smith showed some brilliant acting skills as he pretended to be not out when it clearly looked out to the naked eye.

Steve Smith pretends to be not out after edging the delivery

Australia’s batter Steve Smith has a history of showing disappointment over his dismissals. He added one more chapter to that list in the third ODI against England at the Melbourne Cricket Ground as he showed as nothing happened even after clearly hitting the ball bowled by Olly Stone and caught by wicketkeeper Jos Buttler.

Olly Stone bowled a fast-paced short delivery to Smith who was premeditating a Yorker on the third delivery of the 46th over of Australia’s innings. Smith positioned himself way outside towards the sixth stump line and then adjusted to pull the stump line bouncer. However, the Aussie batter was too late on the shot and his glove flicked the ball on its way through to Buttler.

Smith departed for a 16-ball 21 after coming to bat number three as Australia got a brilliant opening partnership from David Warner and Travis Head. Head scored 152 runs off just 130 deliveries while Warner scored 106 runs off just 102 deliveries.

Also Read: ‘Need to be realistic’- Deepak Hooda has his say on replacing Kohli as India’s No.3

Australia has done well in the series as they have already won the first two games of the three-match ODI series. The series is crucial for both sides as the ODI World Cup is scheduled next year in October-November in India and the teams won’t get much time from now on to shift focus towards the ODI format.