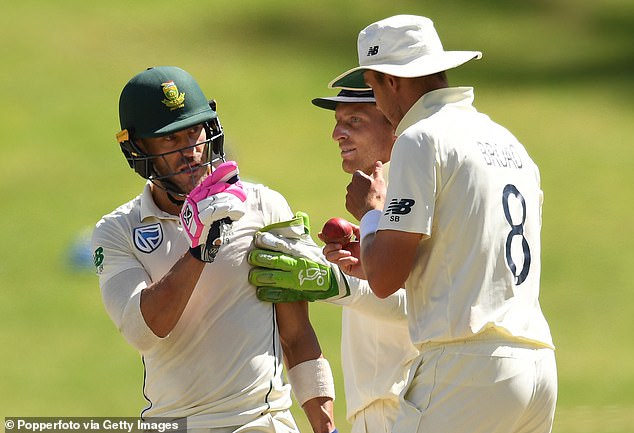 On Monday, England defeated South Africa by 191-runs in Johannesburg to register a 3-1 series victory in the 4-test series. The match was quite iconic in terms of the number of people celebrating their farewell in one-form or another. South Africa’s senior pacer, Vernon Philander, for instance, played the final test match of his career. The English team’s popular fan-base, the Barmy-Army, cherished the retirement-match of their beloved trumpet-player Billy Cooper. And then there’s this whole predicament hanging around the South African skipper, Faf du Plessis.

Du Plessis’ captaincy, specially in test-matches, had been under the scanner for quite some time now. The loss at New Wanderers takes his tally to 8 defeats in the last 9-matches. Cricket South Africa (CSA) has already discarded him off the team’s limited-overs setup. With Quinton de Kock taking over the helm of the ODI and the T20I sides, there is a big question hovering over the heads of South Africa fans-did du Plessis just play his last international match?

Speculations aside, for the time being, he has certainly dodged a bullet from the last match. Hours ago, the ICC awarded England fast-bowler Stuart Broad a demerit point for his on-field altercation with the South Africa captain.

The incident in question happened on yesterday, the fourth-day of the test. England all-rounder Ben Stokes had bowled the South Africa captain with a beautiful delivery. On his way to the dressing-room, though, Broad intercepted him, and both the players had an animated exchange on-field. The ICC, in its official statement, declared that Broad has been awarded a demerit-point and a 15 per-cent match-fee fine for, “use of an audible obscenity during an international match”. This puts up Broad’s tally to 2-demerit points over the past 24-months. 2-more points would result him in coping a test-match ban.

Interestingly, this exchange wasn’t the only occasion yesterday when both the players decided to have a go at one-another. 2-overs prior, in the 57th over, du Plessis had to duck against a spicy bouncer that Stokes lobbed at him. Fielder Sam Curran collected the ball and threw it, which hit du Plessis’ thigh. This riled-up du Plessis; he walked over to have a word with England’s Ollie Pope, Broad and Curran. The visitors’ wicket-keeper Jos Buttler tried to intervene and diffuse the situation. In the process, both collided and Butler copped a push on his left-shoulder.

The ICC’s verdict on Broad leads to the assumption that du Plessis is safe from any further allegations. The South African skipper himself also opined about the incident, talking it down to “nothing malicious”. “It’s somewhat in my character to give it back to the opposition. But there wasn’t anything malicious. Jos tried to diffuse the situation; nothing wrong there. Just a few words between me and Broady”, he concluded.