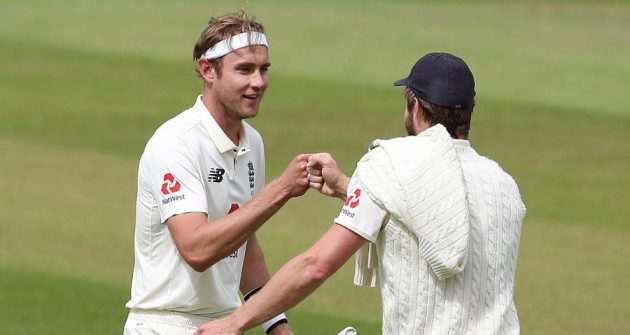 Stuart Broad has been running a riot with his bowling ever since he came back in the second Test against West Indies. He is proving to be unplayable and way too good for the Windies batsman. His performance in the ongoing Test series proves why he is a crucial cog in the England setup and why they can’t afford to drop him.

Broad has been bowling brilliantly in the ongoing #raisethebat Test series against West Indies. This is a superb response by the bowler after being left out by the team for the first Test. Speaking before Broad took his 500th wicket, Sky Sports Cricket’s Nasser Hussain said: “I thought Stuart would be a great for England and it has helped having Anderson there just ahead of him all the time.”

“Even though it’s a team game there are individual bits of pride, passion and stats you want to keep. Jimmy wants to be the No 1 England bowler. That is healthy competition to have in English cricket.”

“When Stuart has a point to prove, gets his knees pumping and into rhythm, he is not someone who does average – he does exceptional. He has done that throughout his career.”

Broad finds himself in an elite company

Broad has become the second English bowler after James Anderson to take 500 wickets in Test cricket. Broad has entered a list of elite players who have achieved the milestone in the past. There are only seven bowlers who have achieved the feat. Besides Broad and Anderson, Glenn McGrath, Courtney Walsh, Muttiah Muralitharan, Shane Warne and Anil Kumble are the only bowlers to do so.

Blown away by the kind support. Thank you so much. To take # 500 in a Test match win leading to a series win feels very special. I love cricket 🏏 😁 https://t.co/V2xpkPJ1Go

Kraigg Brathwaite became Broad’s 500th victim at Emirates Old Trafford on the fifth day of the third Test match against West Indies. It is interesting to note that Broad is only the 4th fast bowler to reach 500 wickets in Tests which makes his achievement even more special.