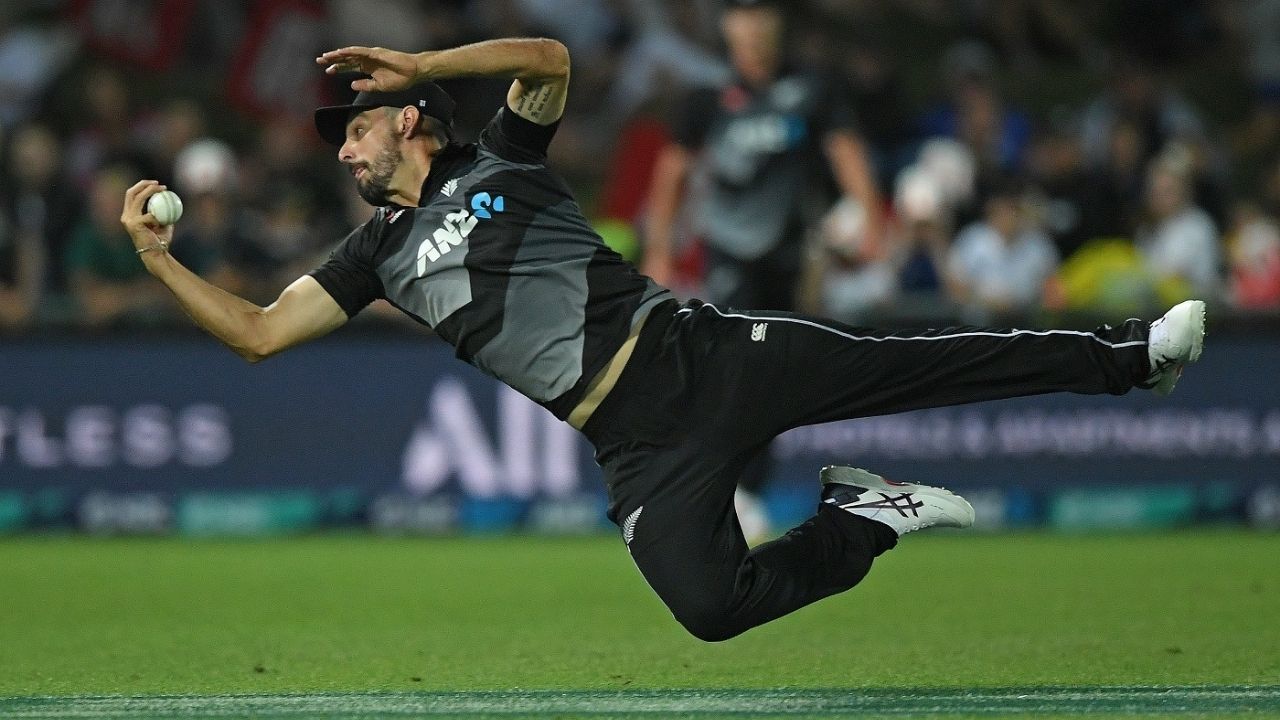 After losing the first two matches, Pakistan pulled off a stunning last-over win against hosts New Zealand to finish the 3-match T20I series 2-1. All-rounder Iftikhar Ahmed struck a maximum off the penultimate ball to help the men-in-green win by 4-wickets and avoid a whitewash.

It was a spirited run-chase from the Pakistani batsmen, led right from the front by their senior pros, Mohammed Rizwan and Mohammed Hafeez. The duo were involved in a match-winning 72-run partnership; with Rizwan registering his maiden half-century (89) in the shortest format. Hafeez scored 41, carrying on with his impressive run of white-ball form this year.

But for as eye-catching as Pakistan’s win was, really, it was New Zealand all-rounder Daryl Mitchell’s catch of Haider Ali that set the highlights reel on fire. The 29-year-old pulled off a stunning, one-handed blinder at the McLean Park, and currently finds himself as a top contender for Spark Sports’ Catch of the Summer.

It all happened during the sixth over of Pakistan’s innings. Fast-bowler Scott Kugglejin lobbed a quick, length-delivery at Haider; the latter responded to which by jamming his bat down the off-side. Unfortunately, he couldn’t quite time his shot and got a risky leading edge off the bat.

The ball flew towards the cover; right where Daryl had positioned himself after coming on as a sub for the injured Martin Guptil. It wasn’t looking easy, but Daryl ran a few yards back and stuck out his right arm. And in an incredible stroke of luck, the ball landed there, giving Mitchell and the Kiwis a sensational wicket. Here’s the video from the Spark Sports’ Twitter feed:

IS THAT THE CATCH OF THE SUMMER?

Daryl Mitchell is on as sub-fielder for one ball and takes this special grab to remove Pakistan opener Haider Ali.

Earlier in the day, New Zealand had put up  174 on board; thanks to sizable contributions from Tim Seifert (35), Glenn Phillips (31), and Devon Conway (63). Pakistani pacer Faheem Ashraf starred with the ball and finished his spell at 4-0-20-3.

With the T20I series done and dusted, the action now moves on to the two-match test series starting from December 26. Mount Maunganui will host the Boxing-Day test, while the New Year test starts on 3 January at Christchurch.