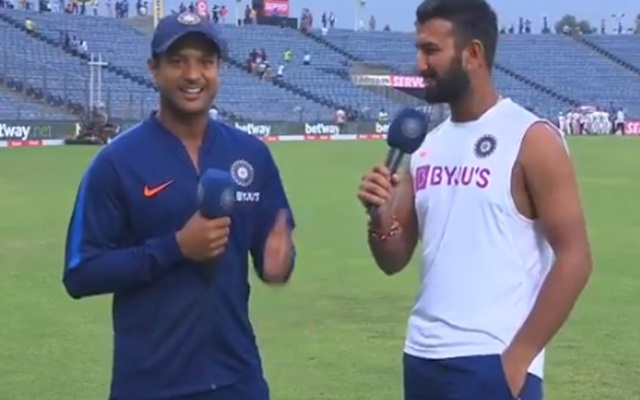 Talk about a dream season for Mayank Agarwal. It took some time for the Karnataka batsman to get his chance in the international arena. But years of patient grinding in the domestic circuit had helped him immensely improve on his game. So much so, that on his debut in the tough Australian decks, Mayank embraced the challenge with arms wide open and scored two fine fifties.

Apparently though, Mayank had saved his best for his fans back here at home, where he has hit the peak of his patch. His appetite for runs became clear in the series against South Africa, where his 340 runs included a double century and a century. It’s unlikely though that he’ll be satisfied anytime soon, as he compiled another fine double century today at Indore. Ultimately though, his gluttony for runs ended his innings as he failed to connect one over deep mid-wicket. Abu Jayed took a fine catch and thus ended Mayank’s power-packed innings.

For the while it lasted though, Mayank’s teammates enjoyed the one-man show to their best. Earlier cameras recorded a humorous moment where captain Virat held up his 2 fingers, demanding a double-hundred. Mayank, after reaching the double hundred mark, replied back with his 2 fingers held up ‘V’ to his captain. Virat though, wanted more from his ace batsman as he flashed another three fingers,  now demanding a triple century from Mayank! 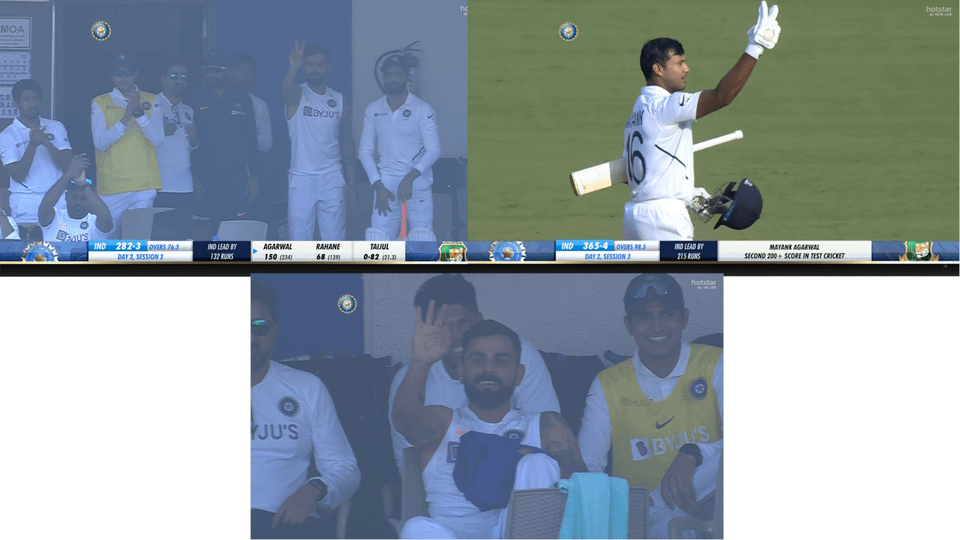 However Rohit Sharma’s actions grabbed most of the spotlights of humor. When Mayank was batting on 210, Rohit walked out of the dressing room and rather animatedly gestured Mayank to hit more sixes. Apparently, he was asking Mayank to finish his triple century today itself. Naturally, it was only a matter of time before the ‘Hitman’ demanded for some power hitting. His actions left the entire dressing room in splits, and even on-air commentator Sunil Gavaskar couldn’t control himself. Here’s a video of the comical moment.

While Virat didn’t get his request, ‘Hitman’ sure did get to watch some power hitting as Mayank and Ravindra Jadeja scored 56 runs off the next 32 deliveries. Even after Mayank, Jadeja, Wriddhiman Saha and Umesh Yadav kept piling on to the misery of the Bangladesh bowlers. At the end of day 2, India comfortably lead over their tourists by 343 runs with 4 wickets in hand.