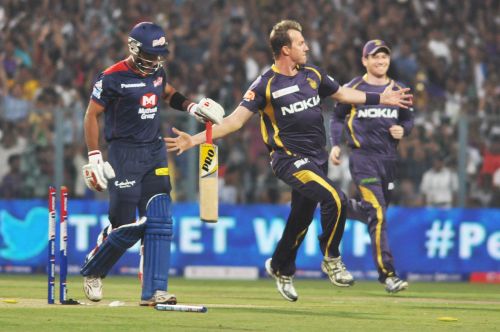 With the months drawing closer, the hype for the much-awaited 13th edition of the Indian Premier League is starting to build-up. The participating franchises have already started their preparations for the upcoming season. The Royal Challengers Bangalore, for instance, just recently, embarked on a new decade of cricket with a new logo and a remodeled-uniform. IPL fan-pages and social-groups are now, once-again, brimming with their usual pre-season activities. Fans seem to have well embraced the marketing-slogan of one of the previous IPL seasons, “India ka Tyohaar” (India’s festival). So here’s us from Sportstime247, engaging in some of our own pre-festivity celebrations, looking back on some of the iconic moments over the 12-editions of the grand tournament.

We start with the first-ball of the 6th edition of the tournament, played nearly 7-years ago at the Eden Gardens. Winning the toss, Kolkata Knight Riders Skipper Gautam Gambhir asked his visitors to set a target. One could quite comprehend the logic behind Gambhir’s decision to field first. The Daredevils’ relatively lesser-experienced opening pair of Unmukt Chand and David Warner, were up against the fiery likes of Brett Lee, Jacques Kallis, Laxmipati Balaji- just a few prominent names in a star-studded bowling attack. Chand decided to take-strike for the visitors, while the Knight Riders roped in Brett Lee to begin the proceedings.

In retrospect, the 2013-IPL season was supposed to be a season that defined Chand and his eventual ascension to the senior India team. Just a few-months back, the Delhi-based lad propelled his side to the glorious under-19 title. His destiny appeared some-what scripted- perhaps a bit too well-scripted. Comparison’s with yet another age-cricket winning  India captain were doing their rounds; Chand seemed ear-marked for success. Before any such-ambitions could take-off, Brett Lee struck down with a blow of reality check with an Australian ‘Jaffa’.

The legendary Australia-pacer came up with a sharp and quick angling in-swing delivery. Few could grasp the magnitude of the dismissal; let alone a puzzled-looking Chand. Taking a dismal trip back to the dressing-room was the sole choice he had.

The first-over wicket opened up the floodgates for KKR to make an incision through the Daredevils’ batting line-up. Captain Mahela Jayewardhane was the only batsman who could offer some resistance with a 66-run innings as Delhi collapsed for a meager score of 128-runs. Sunil Narine emerged as the pick of the Knights’ bowlers with figures of 4-0-13-4. Lee and medium-pacer Rajat Bhatia both picked up two-wickets. Captain Gambhir breezed through the 129-run chase with an impressive innings of 41 off 29-balls.

Unmukt’s couldn’t really pick up his trajectory back at any point later in the season. In 9-innings, he finished with only 158-runs, at a disappointing average of 17.55, striking at exactly 100. The ‘make-or-break’ season turned out to be a harsh one for the promising top-order batsman. He represented the Rajasthan and Mumbai team over the next few-years, but couldn’t really cement a spot in either sides. Presently, at age 26, he is back sporting the captains arm-band for Uttarakhand in the Ranjhi Trophy.