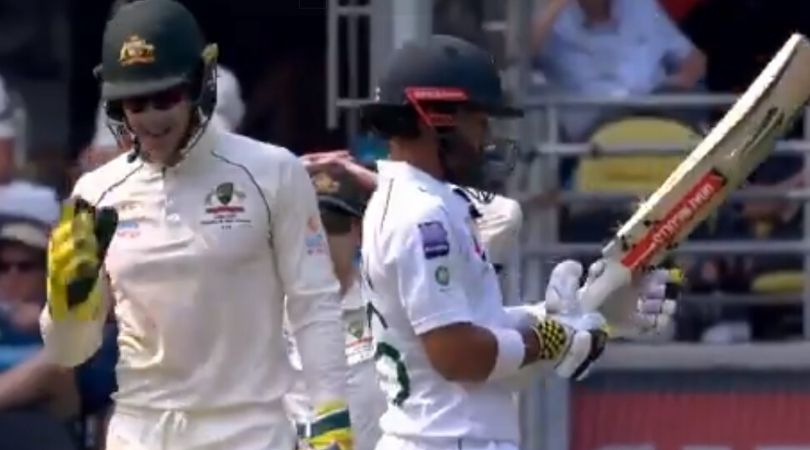 Australia vs Pakistan Test Series 2019 has been started on 21st November at Gaba. Meanwhile, during the first day of the first match, Australian captain Tim Paine exchanges some words with Mohammad Rizwan. Australian wicketkeeper sledges Pakistan batsman with a funny message.

It all happened during the 46th over of Pakistan innings when spinner Nathan Lyon was bowling to Rizwan. Paine, who is usually chirpy from behind the wickets, continued with his knack of saying things albeit in a healthy manner.

This is not the first time that Paine sledges the batsman with a hilarious comment. In the past during the series against India, Paine was hilariously involved in funny ‘Babysitting’ banter with Rishabh Pant. However, later on, Pant also replied to Tim Pane while Pant was wicketkeeping. Rishabh Pant sledged Tim Paine by saying ‘the temporary captain’.

Now it will be very interesting to see how Pakistan players will respond to the comment when Tim Paine comes to bat. Here we are sharing the video of the incident in which Tim Paine sledged Pakistan cricketer Mohammad Rizwan.

Tim Paine was impressed with Muhammad Rizwan's scent upon his arrival at the crease 😅#AUSvPAK pic.twitter.com/DMHYDEm2Pl

Short Summary of the first day

Earlier in the match, Pakistan after winning the toss had decided to bat first. At the end of the first day, Pakistan scored 240 all out. From Pakistan, only Asad Shafiq could manage to score 50+ as he scored 76 before getting out in hand of Pat Cummins. And from Australia Mitchell Starc took 4 wickets, Pat Cummins 3, Josh Hazelwood 2, and Nathan Lyon had taken 1 wicket.