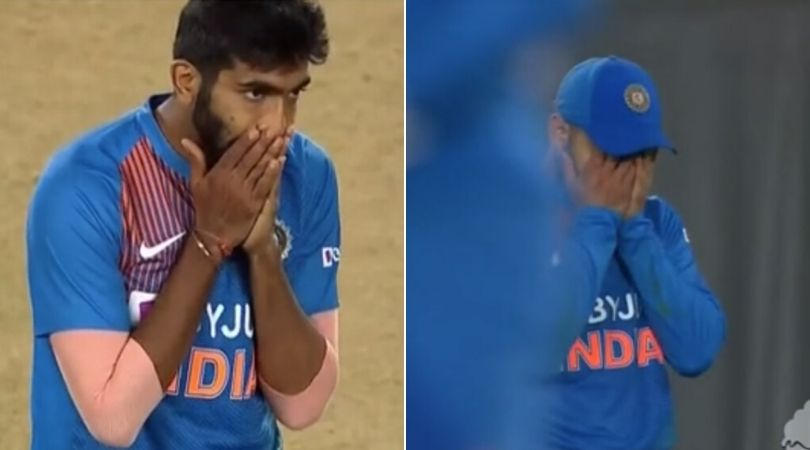 Not too-long ago today, the Indian team completed a comprehensive beat-down over their hosts New Zealand to lead the 5-match T20I series 2-0. Kiwi skipper Kane Williamson made a wrong-call after winning the toss, choosing to set a target for the visitors. The New-Zealand batsmen never really looked settled to stitch any solid, game-defining partnerships. Jasprit Bumrah and Ravindra Jadeja led the Indian-bowling attack to put up an aggressive-bowling display, which restricted the Kiwi batsmen to a paltry-total of 132-5. The Indian batsmen made a short work of the target and won the game convincingly.

Despite the all-round domination; though, there were a few blemishes in the team’s fielding performances. The most-blatant one of which came from the team’s captain, Virat Kohli himself. During the 18th over of New Zealand’s batting, Kohli made complete-mess of an easy catch-opportunity. India’s ace-pacer, Jasprit Bumrah was bowling, and on the third ball; on-strike batsman Ross Taylor lobbed his delivery into the night-sky. Taylor hadn’t timed the delivery well enough, however; so it was headed for a high-but not a long drop at long-off. The Indian skipper had positioned himself over there, his hands being some of the safest in the entire Indian team. Kohli barely had to cup his hands to collect the catch; which he did…but his wrong estimate caused the ball to drop and land safely on the ground! Ross Taylor got an unbelievably fortunate reprieve, that too in the dying moments of his innings.

Player’s reaction to the catch

More than the dropped-catch, however, the players’ reactions made the moment extremely memorable. Bumrah smiled in frustration, trying to contain his anguished feelings within himself. Kohli also flicked a smile; but not before holding his palms over his face in sheer disappointment. From his reaction, one can guess how much the Indian captain values on-field perfection. Kohli had successfully fielded the wickets of Martin Guptill and Colin Munro, but this one moment of mistake extracted much-more emotion out of him than his successful attempts. Here’s the video of the dropped catch.

Unfortunately, Kohli couldn’t redeem his sloppy bit on-field with his usual batting-exuberance. He did hit a boundary in his 12-ball stay at the crease, but nicked-off a catch to wicket-keeper Tim Seifert off pacer Tim Southee’s bowling to depart for only 11-runs. Thankfully, his rare moment of failure didn’t impact much of India’s batting performance. The rebooted players of the team, KL Rahul (57*) and Shreyas Iyer (44) helped the team seal-off the chase comfortably. Both the teams will now travel to Hamilton to lock horns at the third T20I, on 29 January.