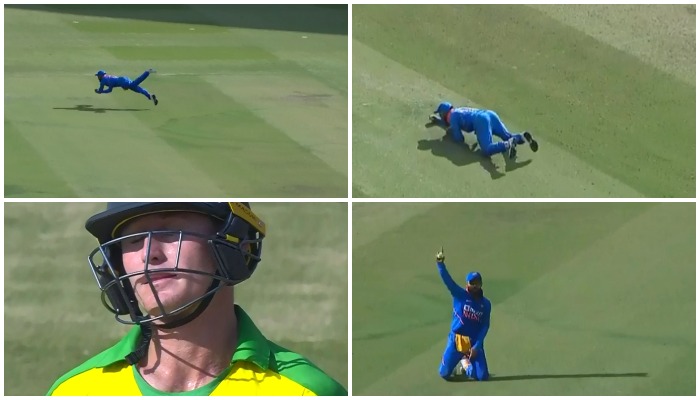 Virat Kohli Grabs Super Catch To Dismiss Marnus Labuschagne: On Sunday, India and Australia played the third and final match of Ind vs Aus ODI series 2020. Meanwhile, during the match at M.Chinnaswamy Stadium in Bengaluru, Indian skipper Virat Kohli took a super stunning catch to dismiss Australian batsman Marnus Labuschagne. It was a much-needed breakthrough for India as the partnership between Steve Smith and Marnus Labuschagne were going dangerous in the perspective of Team India.

It all happened in the 32nd over of the Australian innings when Labuschagne was about to face the third ball of the over from Ravindra Jadeja. Meanwhile, Jadeja bowled a Quickish delivery and Labuschagne makes room to go inside out, but the slowness of the surface does not allow him to control the drive, hits it uppishly to the right of the cover. Indian skipper who was placed at the cover the position took a stunning diving catch. Hence Marnus Labuschagne had to make his way towards the Pavillion.

Board of Control for Cricket in India (BCCI) has shared the video of the stunning catch on their official website. They have written in the title, “Watch out! Superman Virat on the ground.” Here we are attaching the video of the same at the below of this article.

Summary of the First Innings (India vs Australia, 3rd ODI, 2020)

Earlier in the match, after winning the toss Australia decided to bat first at M.Chinnaswamy Stadium in Bengaluru. Meanwhile, in the first innings, Australia managed to score 286-9 at the end of the 50 overs. Steve Smith played a heroic knock of 131 runs and helped the team to set a target of 290 in front of the hosts. From India, Mohammad Shami took 4 crucial wickets which also included the wicket of Steve Smith. Now Team India needed to score 287 runs to win the match.