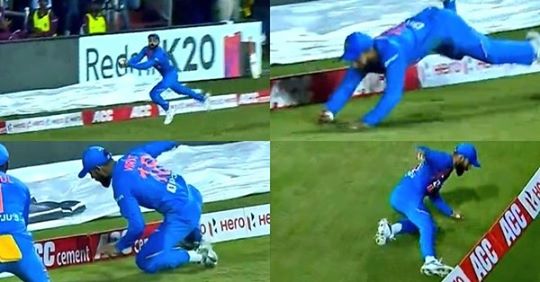 On Sunday, Virat Kohli once again proved why he is known to be the best in all around the world. During the ongoing T20 series against West Indies Virat pulled off a stunning catch to dismiss Shimron Hetmyer. It all happened when India was in a desperate need of a wicket as West Indies were cruising in their run chase. They were 112 for 1 while chasing 171 before Kohli’s effort helped India get a much-needed wicket.

Indian skipper Virat had played a sensational knock in the first T20I of the ongoing series. He had played an inning of 94 runs off just 50 balls as helped team India to register a victory in the first T20I in Hyderabad. However, he failed to continue his form in the second T20 as he manages to score only 19 runs. To make the matters worse, he was dismissed by none other than Kesrick Williams. Both the players have been engaged in an interesting duel since the first ODI. In the first match of the series, Kohli had mocked the Kesrick by replicating his celebration.

As we all know that Virat Kohli is one of the fittest fielders of India. In the second T20 31-year-old failed to score with the bat but he comes up with a stunning catch when India needed a wicket. However, India lost the match as other fielders made few mistakes and dropped the catches. In fact, West Indies batsman has played very nicely, especially Lendl Simmons.

Earlier in the match, West Indies after winning the toss decided to bowl first at Greenfield International Stadium, Thiruvananthapuram. Meanwhile, India manages to score 170-7 at the end of the 20th over thanks to Shivam Dube’s 54 runs. In the reply, West Indies chased down the score in the third ball of the 19th over. From West Indies Lendl Simmons scored 67 off just 45 balls and helped the team to level the ongoing T20 series with 1-1. Now both the team have to play the third and final match of the series at Wankhede Stadium in Mumbai on 11 December.