The fans witnessed quite an interesting event in the second Test match involving the keepers from West Indies and Sri Lanka. 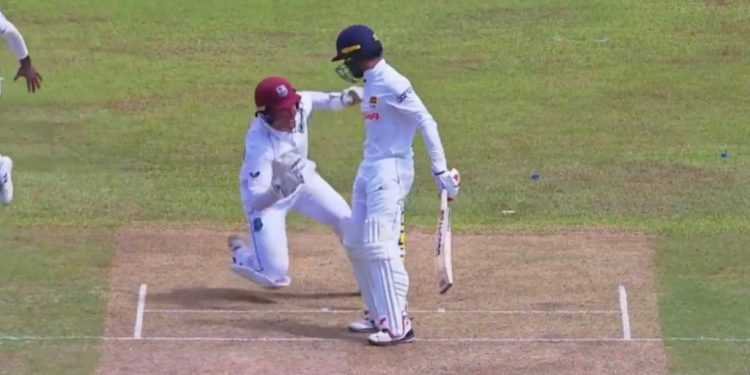 Sri Lanka and West Indies are engaged in a 2-match Test series which is currently taking place in Sri Lanka. The fans witnessed quite an entertaining incident in the second Test match which is underway at Galle. The incident involved West Indies keeper Joshua de Silva and Sri Lanka’s Dhananjaya de Silva. Da Silva was caught by De Silva in the first game and it was a payback time for De Silva in the second Test.

The first match, which also took place in Galle was won by Sri Lanka by a big margin of 187 runs. The hosts put up a great show with the bat and didn’t give West Indies any chance to revive.

The hundred-run partnership between Joshua Da Silva and Bonner was the highlight of the West Indies inning, however that couldn’t prevent the loss for the Windies. Joshua da Silva was caught by Dhananjaya de Silva and the former took his revenge in the second Test match.

Interestingly, the second match saw Da Silva catching De Silva behind the stumps. What makes the incident even more unbelievable was the fact that Joshua da Silva had jokingly given a warning to De Silva that he will be caught by Da Silva. The West Indies keeper said, “You catch me, I catch you – that’s how it works in cricket.” Just after a while of the warning, the West Indies keeper caught the Sri Lankan keeper.

After being caught by (Dhananjaya) de Silva in the first Test, (Joshua) Da Silva promised revenge – and he got it! #SLvWI pic.twitter.com/GqkKR4NM3U

The visitors made a comeback in the second Test as they restricted Sri Lanka on just 204, taking a lead of 49 in the first inning. At the time of writing the article, Sri Lanka has lost five wickets at the score of 169 and leading by 120 runs. If West Indies can wrap the Sri Lankan tale quickly, they have a good chance of winning the contest.