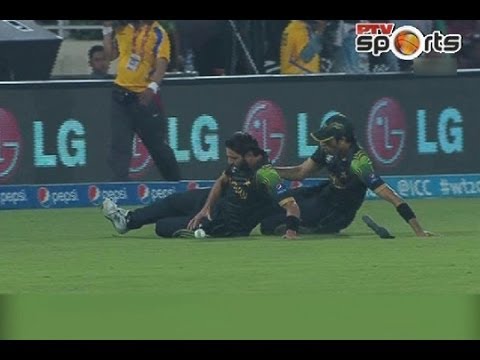 WATCH-When Pakistan Fielders Did Mujra On Cricket Field: Nowadays, the fielding level of the teams has improved much as compare to the old days. Today’s team management along with cricketing skills are demanding the high fitness level high from their players. As we all know that fielding is a very important part of the game. A good fielder can save runs for the team and help the team to win the matches. On the other hand, if the fielding level of the team is not up to the mark or good, it can cost the matches.

In the past time, teams had only two or three good fielders but nowadays every team try to have all the good fielders in the team. However, some International teams still have not that much fielding level because of their player’s fitness level. Pakistan team is one of them whose fielding level is still not up to the mark. Although, here we are sharing a funny video of older times in which the Pakistan Fielders have made a hilarious mistake.

The entertainment level for the fans has improved a lot because of the numerous number of Cricket League started around the world. Fans are enjoying to watch the matches as well as the special moments of the matches with the help of latest technology. Nowadays, improved technology is helping fans a lot in order to enjoy watching their cricket stars. And this is the reason that on the Internet a number of videos are getting viral. Meanwhile, a video from the past is making rounds on the internet from some time. The video is of Pakistan cricketers Shahid Afridi and Umar Gul making the hilarious mistake.