Watch: Windies Shane Dowrich cops a nasty injury to his mouth from a bouncer. 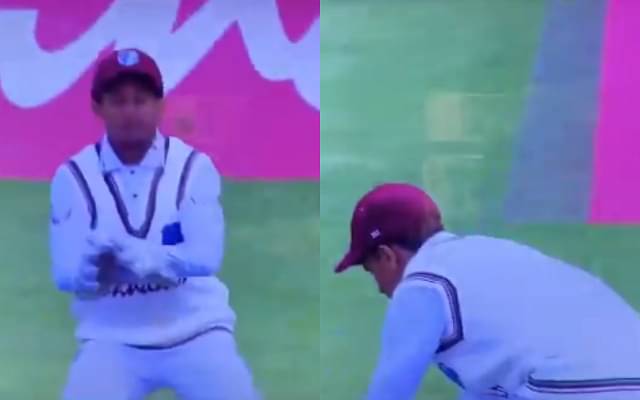 The ongoing third test match between England and West Indies at the Old Trafford has been a spicy, pace-bowling dominated affair thus far. Maybe a bit too spicy, as far as England’s Ben Stokes’ trousers are concerned. Jokes aside, seamers from both teams have dominated the wicket-charts; Dominic Bess, England’s lone specialist spin-bowler for the match, is yet to roll his bowling arm over. Stuart Broad, meanwhile, is passionately ‘celebs appealing’ his upcoming 500-test wicket milestone with a sensational all-round display.

The Windies, meanwhile, find themselves in a spot of trouble, as a massive 400-run-target chase awaits them. And with two of their batsmen already back in the hut, the task’s only getting more torrid. Losing another batsman would be the last thing they’d want right now- but it might be a little too late for that. West Indies ‘keeper Shane Dowrich copped a nasty lip-injury during fielding last innings, which could affect his batting odds in the fourth-innings.

It all happened during the eight over of England’s second innings yesterday when speedster Shannon Gabriel lobbed a bouncer at Rory Burns. Rory made no attempts at playing the ball, but Dowruch should’ve easily collected the ball by cupping his hands. And he did do so; except the ball deflected off his gloves and stuck him plumb on his upper lip.

The match came to an instant halt as the umpires had to tend to Dowrich, whose upper lip was bleeding profusely. But he couldn’t bear the pain and had to ultimately walk-off the field. Shai Hope took the gloves for a few overs before Joshua de Silva walked in as the substitute gloveman. Here’s the video of the freaky injury:

Presently, it’s unclear whether the extent of Dowrich’s injury will allow him to bat in the second innings or not. The Windies would want his batting, though- his patient 37-run first-innings knock was what saved them from following-on. He should have some recuperation time, however, since there’s a prediction for rain all through day-four.