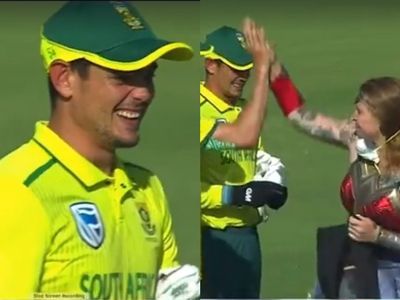 Both England and South Africa lived up to the action-packed reputations; and delivered a fitting-conclusion to the T20I series at Centurion. English captain Eoin Morgan blazed away to his 13th T20I half-century off just 21-balls, to chase down a mammoth 223-run target with 5-balls to spare. The clinical 5-wicket win sealed-off the 3-match series 2-1, in the touring English team’s favor.

Among all the high-adrenaline moments of the game; of which there were many; one incident in particular left the spectators and players quite-amused. The English openers were an over-deep into their chase; until Proteas’ pacer Lungi Ngidi broke the partnership. Tabraiz Shamsi pulled-off a stunning catch at third-man position to initiate Jason Roy’s long walk back to the pavilion.

The home-side were busy in their passionate celebrations; it took them some time to realize the presence of an intruder on-field. That’s correct; right at the time when Roy’s dismissal had brought the match to a stop, a young woman in costume charged into the ground; apparently trying to communicate a message to everyone gathered in the stadium.

This intruder, dressed as Wonder Woman from the DC Comics series, approached South Africa captain Quinton de Kock. The two shared a small chat-de Kock expressing no signs of concern whatsoever- before ‘Wonder Woman’ presented him with a white pollution-mask. De Kock’s fellow-mate, fast-bowler Dale Steyn too joined in the conversation. Both de Kock and Steyn appeared to enjoy the intrusion; Steyn even sharing a high-five with the lady. The players both gladly accepted the masks; while the lady herself merrily cheered for the players.

VICTORY: One of our superhero activists have made it to Quinton de Kock and have given him a mask at the South Africa versus England, T20 game at SuperSport Park. Tell Barbara Creecy, the Minister of Environment, Forestry and Fisheries that the sports field is no longer a safe place to take a deep breath. Tell her not to weaken our air quality standards >> https://act.gp/2HpTHBU Source: SuperSportCricket South Africa#BowlOutAirPollution#QuitCoal

Source from the New York Times later confirmed that ‘Wonder Woman’ was actually an activist belonging to the local Greenpeace Africa organisation. In fact, several Greenpeace activists had assembled at the Super Sport Park to protest about Highveld’s deteriorating air-quality. The organization themselves later posted on Facebook, featuring several of their ‘superhero-activists’ and their endeavors.