The keeper batter Yastika was included in playing XI after Taniyaa Bhatia faced concussion during the match. 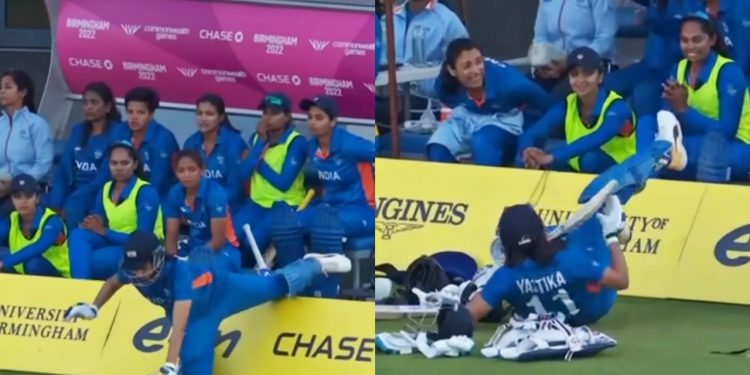 On Sunday, India suffered another heartbreak in a Cricket final. India women’s team ended up on the losing side in a close CWG final against Australia. Women in Blues were in a good position till Harmanspreet Kaur was in the crease. However, as soon as India lost their skipper, the whole batting line-up tumbled.

11 runs were required in the last over with Yastika Bhatia being India’s last hope. However, the keeper-batter couldn’t make India reach the target. She wasn’t part of India’s Starting XI however got the chance to play as a concussion substitute replacing Taniyaa Bhatia.

India were on the back-foot when Yastika Bhatia came out to bat and pressure on her could be seen as she tripped when she walked out from the Indian dugout. The teammates including Smriti Mandhana, Harmanpreet Kaur, and Jemimah Rodrigues left in splits as it happened. However, Bhatia stood up and didn’t seem to be embarrassed as she herself was also seen smiling.

Harmanpreet Kaur scored a well-fought half-century and except Jemimah Rodrigues, no other batter supported her during the innings. India women settled with silver while mighty Aussies once again became the champions. Also, New Zealand bagged bronze medal after beating host England in the 3rd-place playoff.

Harmanpreet Kaur feels most of her teammates do not have enough experience due to the lack of women’s cricket and that costs India in the crucial games. Previously, India had reached the Women’s T20 World Cup 2020 Final but again were beaten by Australia.

ALSO WATCHl: Radha Yadav pulls off an amazing run-out to bring India back into the game

“Every time in big finals, we make the same mistakes again and again (with the bat), that is something we have to improve,” Harmanpreet said after the match on Sunday.

“We don’t do these mistakes in the league phase or in bilateral. That is blocking our mind somewhere,” the skipper added.