India Capitals put up a brilliant batting performance and sealed their spot in the final which will take place on 05th October at Jaipur. 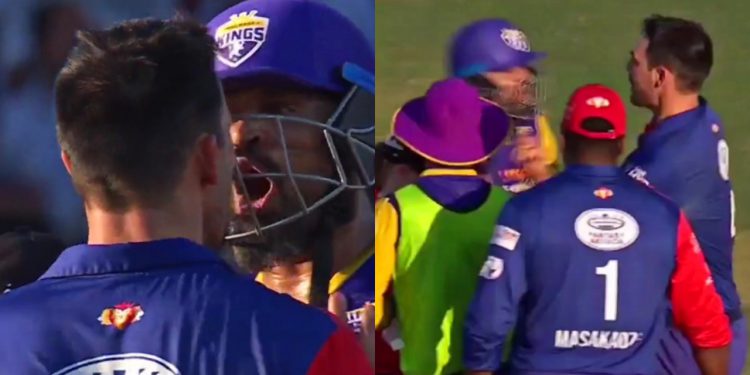 The 2022 edition of the Legends League Cricket has picked up real momentum as it has reached its business end. Things have gone really intense and the teams that are battling it out to reach the final are giving it all to lay their hands on the trophy. In the high octane Qualifier which took place on Sunday, things got very tense as Yusuf Pathan & Mitchell Johnson engage in physical altercation.

The Qualifier saw Bhilwara Kings and India Capitals locking horns to seal the spot in the final. It was a high-scoring match, where both the teams crossed the 200-run mark, however, it was India Capitals that trumped their opponent and confirmed their berth in the final. Apart from the blistering batting by both sides, there was an incident involving Yusuf Pathan & Mitchell Johnson where things between the two went on to another level.

It was during the first inning of the match when the verbal and physical altercation took place between Yusuf Pathan & Mitchell Johnson. Irfan Pathan, who is the skipper of the Bhilwara Kings opted to bat first and his batsmen responded pretty well as they notched-up a score of 226 runs in their 20 overs. It was during the death overs of Bhilwara Kings inning where the two cricketers from both the sides went head-on.

The altercation started verbally as both Yusuf Pathan & Mitchell Johnson were caught exchanging words. However, things got pretty wild as both the cricketers came really close to each other and Johnson even pushed the batsman.

It was at this moment that the umpires had to come in between to separate the two. As for the match, even after scoring over 200 runs, Bhilwara Kings were unable to defend the target which confirmed a spot in the final for India Capitals.