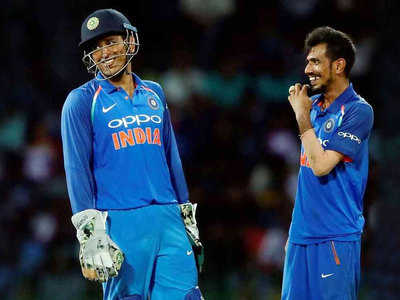 During Saturday’s ODI match between India and New Zealand, fans got to witness an interesting side of  Yuzvendra Chahal. The India leg-spinner assumed the role of former wicket-keeper MS Dhoni, and helped captain Kohli to make a correct DRS decision here in the second ODI of the series at Eden Park.

The moment of dilemma came right at the beginning of the match. Fast-bowler Shardul Thakur bowled the penultimate ball of the third-over to New Zealand opener Martin Guptill. The delivery beat Guptill’s bat, and struck him plumb on his pads. The Indian players wasted no time and immediately went up for a loud-appeal. The straight umpire, however, didn’t appear too convinced, and ruled in Guptill’s favor.

Kohli walked up to Thakur; wicket-keeper KL Rahul also joined, and the players contemplated about using the Decision Review System (DRS). It was at this point that Chahal decided to weigh in his own take about the situation. He walked up to the huddle, and tried to convince Kohli not to waste the DRS. Chahal, somewhat animatedly, gestured to the team that Guptill had, in-fact, edged Shardul’s delivery. The team decided to go with Chahal’s gut-feeling, which later, turned out-to be the right decision. The following on-field replays confirmed Chahal’s claim about the edge, saving his team a valuable review.

Despite starting on a shaky-note, Guptill recovered in time, and powered his side to a decent total of 273/ 8. His opening partner Henry Nicholls (41 off 59) also chimed in with a good contribution. Yet, once again, it was Ross Taylor, who came up with the most clinical performance to guide the team out of a tough spot. Taylor, Man of the Match from the last game, composed a measured innings of 73 runs to help his team recover from a restricting position of 197/ 8. Meanwhile, Chahal, who played his first ODI in almost 6-months, emerged as the best India bowler with figures of 10-0-58-3.

Just as we finished this article, James Neesham claimed the final wicket of Ravindra Jadeja, earning his side a hard-fought 22-run victory. The Indian team suffered a rare batting-collapse, before Shreyas Iyer and Ravindra Jadeja joined forces to bring back some stability. Post Iyer’s dismissal, number-9 batsman Navdeep Saini contributed with a gritty, 45-run innings. Ultimately though, the home-side managed to claim all the key wickets courtesy a spirited bowling performance. This victory has now sealed the 3-match ODI series for the hosts, who now lead the series by an unassailable 2-0 margin.