David Warner was troubled by Yuzvendra Chahal in the 9th over of the second inning, but the batsman was riding on luck 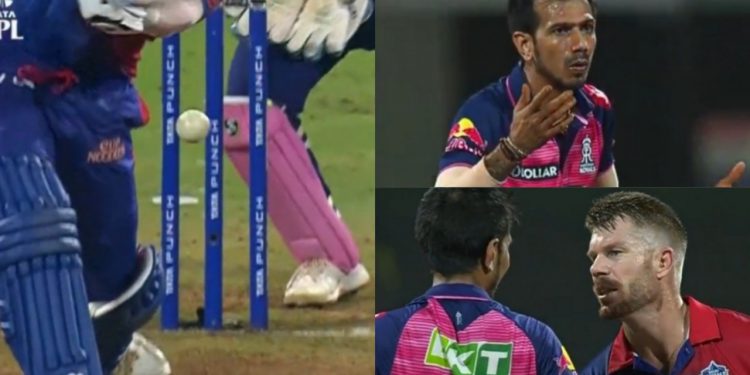 The points table is getting tighter with each passing day as the teams are battling hard to enter the playoffs in the 15th edition of the Indian Premier League. In the 58th Match of the league, Delhi Capitals trumped Rajasthan Royals to make things even more interesting. During the match, there was one incident which left Yuzvendra Chahal in disbelief as ‘Lucky’ David Warner had a close escape.

Rishabh Pant opted to bowl after winning the toss and the bowlers did a decent job restricting Rajasthan to 160. The Delhi batsmen were on fire, especially Mitchell Marsh and David Warner who scored half-centuries and made the contest a one-sided affair. Warner scored an unbeaten 52, however there was a moment where he could have easily gotten out, but ‘Lucky’ David Warner survived and took his team home.

The incident came in the ninth over of the second inning when ‘Lucky’ David Warner was facing the wily Yuzvendra Chahal. The last delivery of the over was a ripper from Chahal as it turned sharply and brushed the stumps. The bails lit up, but unfortunately for Chahal, didn’t get dislodged. The lucky escape of David Warner left Chahal in disbelief. Warner had already gotten two lives in the same over and this was the third time the batsman had a close call.

Warner went on to score a breezy fifty for his team and played an important role in the victory. Apart from Warner, it was Mitchell Marsh who was pivotal in DC’s win. The batting allrounder scored 89 runs for his team and was involved in a 144-run partnership with the ‘Lucky’ David Warner. The partnership between the duo made light work of the chase as Delhi won the game with 11 balls to spare.

With this victory, Delhi is still alive in the race to playoffs. They have 12 points in 12 games and are on fifth position. Delhi will next play Punjab Kings on 16th May and will look to get two more points. On the other hand, Rajasthan is on third position with 14 points and need to win their remaining matches to secure a berth in the playoffs.