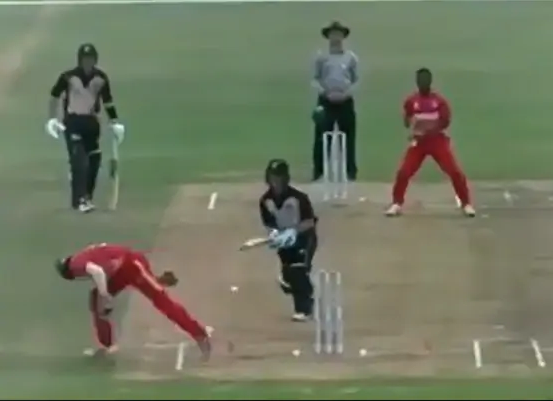 On January 9, Under 19 team of India has clinched the Quadrangular U19 Series in South Africa as in the series finale defeated the hosts South Africa by 69 runs. The series was played between the Under 19 teams of India, South Africa, New Zealand and Zimbabwe. Meanwhile, throughout the tournament Team India remain unbeaten and hence win the trophy with a big margin.

Amidst of all, during the 3rd and fourth place match between New Zealand U-19 and Zimbabwe U-19, Zimbabwean wicketkeeper Dane Schadendorf pulls off a majestic stumping. It all happened in the first innings of the match when Beckham Wheeler-Greenall had no chance of making his way back into the crease. Dane Schadendrof pulls off the stumps with his majestic style.

The video of the interesting wicket is getting viral over the internet. In the video, we can see the Brilliance of the Wicket Keeper to dismiss the batsman. Actually, Dane’s presence of mind and flicking off the stumps in styles was able to hit the bullseye. Here we are attaching the video of the same at the below of this article.

In the Quadrangular U19 2020 Series in South Africa, only Team India looked comfortable throughout the series. Other all teams had to struggle and only manage to earn 2-2 points in the league stage matches. According to the net run-rate, South Africa qualified to play the final match against India.

In the series finale match, after winning the toss South Africa invited Team India to bat first at Kingsmead in Durban. Meanwhile, batting first India managed to score 259-7 at the end of the 50 overs. From India, Dhruv Jurel was the top scorer who scored 101 off 115 balls.

In the reply, South Africa could manage to score only 190 before getting all out inside 44 overs. And hence South Africa lost the match by 69 runs.

Brilliance from the Wicket Keeper.pic.twitter.com/FMkFcrBhfs