Virat Kohli will be making a comeback in the second Test against New Zealand and one of the current players will be excluded. 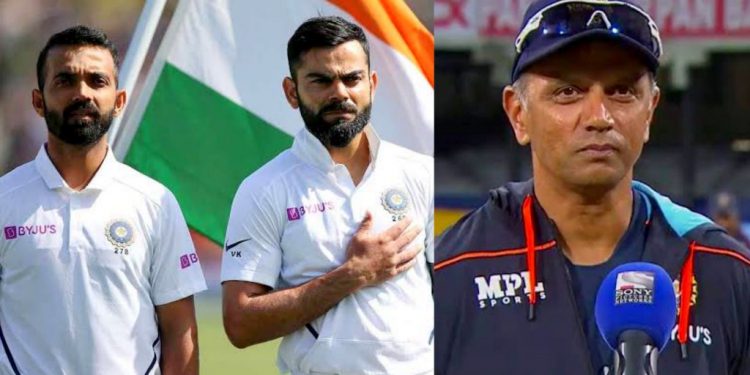 Ajinkya Rahane has been on the radar of the fans for his inconsistent run in the Tests. The right-handed batsman has been struggling to find his form for quite some time and it has become a cause of concern for the team now. After the first Test match, Rahul Dravid speaks up on Ajinkya Rahane’s spot who would desperately want to get back to the form he is known for.

Team India has played exceptional Test cricket in the last one year or so, winning the Border-Gavaskar Trophy against Australia and taking a 2-1 lead against England on their soil. The team has been performing brilliantly, however Ajinkya Rahane has been continuously facing issues with his batting. Now, the new head coach Rahul Dravid speaks up on Ajinkya Rahane’s spot for the Mumbai Test.

In the recently concluded first Test where Rahane was captaining the side, he could only score 35 and 4 in the first and second inning respectively. Rahane’s yet another flop show in the first Test has raised questions on his selection in the Playing XI for the Mumbai Test against New Zealand. Rahul Dravid speaks up on Ajinkya Rahane’s spot after the first match ended in a draw.

Rahul Dravid backed Rahane saying, “He is a quality player and he has done well for India in the past. He is one of those guys who has quality and experience and it’s matter of a game when he would like to turn it around and he knows that and we know that.” Shreyas Iyer’s scintillating performance in his debut game has made selection more complicated for the team.

Virat Kohli is coming back in the second game and one of the players from the current Playing XI will have to make way for the skipper. While praising Iyer’s performance, Dravid made it clear that they are yet to make the final call and the decision will be taken only after Kohli joins the squad.

“Look, we haven’t decided what will be our playing XI and it’s too early. At least, today our focus was on this game and when we go to Mumbai, we will assess the conditions and check people’s fitness. Virat Kohli will join us so we have to discuss with him also and then take a decision,” the coach was quoted saying.