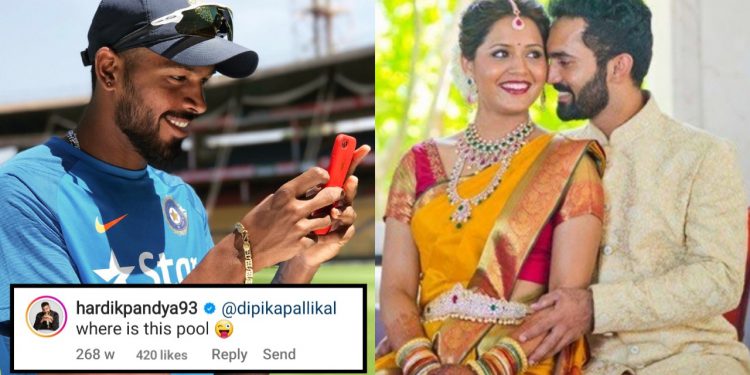 Soon after the Champions Trophy Final loss to Pakistan, back in 2017, the Indian Cricket Team went on a limited-overs tour to West Indies. The tour consisted of 5-match ODI series and a one-off T20I. After gaining a 2-0 lead in the ODIs, the Indian players were seen enjoying their day off at the Antigua beach. Dipika Pallikal, the wife of Indian cricketer Dinesh Karthik who was a part of the squad touring the West Indies, was in the Caribbean as well. She as well was seen enjoying her vacation as she posted a picture of herself enjoying a dip in a swimming pool, back then. Meanwhile, Hardik Pandya seemed to have loved the pool which was at a picturesque location.

Dipika, who is an Indian squash player, was seemingly utilizing the tour with her husband Dinesh Karthik in order to de-stress and relax. She posted a picture of herself unwinding in a swimming pool, though with a witty caption, “Travelling with the husband can be a tough job! #antigua”. The picture she posted was mesmerizing as the pool and the view from the pool, both were alluring.

Indian all-rounder Hardik Pandya, out of curiosity, went on to ask Dipika about the location of the pool. “Where is the pool?”, Pandya commented on the picture that Dipika posted on Instagram. Dipika smartly replied to this without revealing their location. She wrote, “I have a private pool in our villa! Come, I’ll serve you some Nimbu Pani also.”

Pandya, on a funnier note, pointed out that she never told him about the pool and said that he would be coming to their villa. He wrote, “haha you never told wait coming for Nimbu Pani and chat masala.”

During that period, the Indian squad had been through a hectic home season followed by the Champions Trophy. After a disappointing loss in the CT Finals, the Indian squad was looking to refresh themselves amidst the beautiful locations in the Caribbean on their off-days. Talking about the series, the Kohli-led Indian side went on to win the ODI series 3-1. However, the one-off T20I was won by the hosts, comfortably.