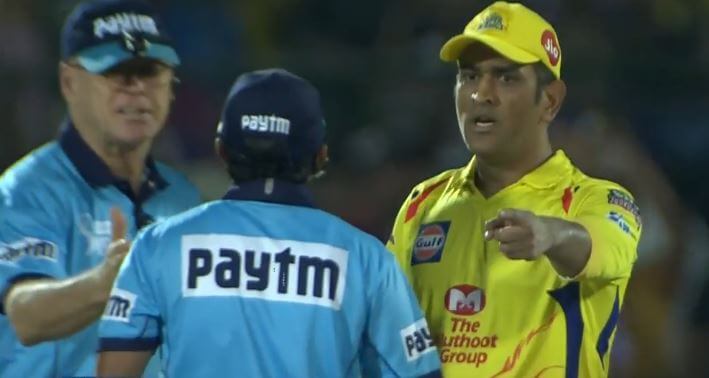 MS Dhoni is one of the coolest players to play the game of cricket. His calm mindset is the reason he never gets deflected by the pressure on the field. But a few times we have seen the captain cool losing his cool. In IPL 2019, we saw MS Dhoni involving in an ugly spat with umpires.

The incident happened during CSK vs Rajasthan Royals match at Swai Mansingh Stadium, Jaipur. Super Kings were chasing 152-run target set by Ajinkya Rahane-led side. The top order struggled against the pace attack of the home side. CSK had lost 4 wickets at the score of 24. However, Ambati Rayudu and MS Dhoni’s sensible partnership put CSK on a strong position.

When Dhoni Lost His Cool Over Umpire Decision

Rayudu departed after scoring 57 and now Dhoni had to do the rest of the work alongside Ravindra Jadeja. CSK needed 18 runs off the last over. Dhoni and Jadeja were able to score 11 runs off the first two deliveries thanks to a no-ball of Ben Stokes. Now, only 7 runs were required in the next 4 balls.

However, Ben Stokes made it a 50-50 contest as he clean bowled Dhoni on the 3rd delivery. The heat started building as 7 were required off the 3 balls now. The 4th ball seemed to be over the waist height on the first glance and the umpire even signalled it a no-ball. But the square-leg umpire didn’t give it a no-ball and which forced the straight umpire to overrule this decision.

The incident created a lot of drama and confusion. It was the moment which forced captain cool MS Dhoni to step on the field, Angry MS Dhoni rushed into the field of play to confront Indian umpire Ulhas Gandhe after he flip-flopped. However, the decision was not changed even after an argument between Dhoni, umpires and Rajasthan players. But this didn’t cost Chennai Super Kings as Mitchell Santner hit a six off the last ball and took the team over victory rope. Here below is the video of Dhoni’s spat with the umpire.