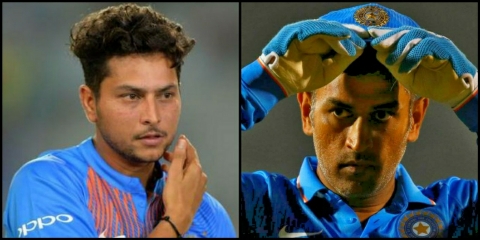 MS Dhoni’s presence on the field plays a big role. He has got the smartest cricketing brain. Even though he is not the captain of the Indian team anymore, he still plays a captain’s duty. 38-year old observes the game from behind the stumps and helps Virat Kohli and Rohit Sharma. Dhoni also keeps giving tips to spinners Kuldeep Yadav and Yuzvendra Chahal and does their half of the work.

Dhoni is known as the coolest brain on the cricket field. However, sometimes ignoring Dhoni’s tips, bowlers like Kuldeep Yadav want to play their own way on which Dhoni expresses anger. Recently, Kuldeep Yadav revealed his scary moment when Dhoni scolded him on the field for not listening to him.

This happened in December 2017, during T20 match against Sri Lanka at Indore. Rohit Sharma was leading the side in the absence of regular captain Virat Kohli, who was unavailable due to his marriage. In the match, Sri Lanka invited the hosts to bat first and in reply, India posted their biggest ever T20I total. With the help of Rohit Sharma and KL Rahul’s 165-run partnership, India scored a mammoth total of 260 runs. During the innings, Rohit Sharma hit the joint-fastest T20I century in 35 balls.

When Dhoni Scared Kuldeep Yadav With His Anger

During the chase, Sri Lanka had a great start as Kusal Perera started hitting Indian bowlers for boundaries. At one moment of that second innings, Kuldeep didn’t follow Dhoni’s suggestion and Kusal hit him for a four in the next ball which made Dhoni very angry. Right after, angry Dhoni scolded the leggie. Kuldeep revealed this in the talk show with Jatin Sapru in ‘ASAP with JSAP’, Kuldeep recalled the memory of that game where he got very scared.

Kuldeep said in the talk show, “Kusal smashed a boundary over the covers. Dhoni Bhai shouted from behind the wickets and asked me to change the fielding. I did not listen to his suggestion and in the next ball, Kusal hit another boundary through the reverse sweep now.”

Kuldeep continued, “I was so scared of him that day. After the match, I went to him while travelling on the team bus and asked if he ever gets angry. To which Dhoni bhai said: 20 saal se gussa nhi kiya hai (I have not got angry for the last 20 years).”