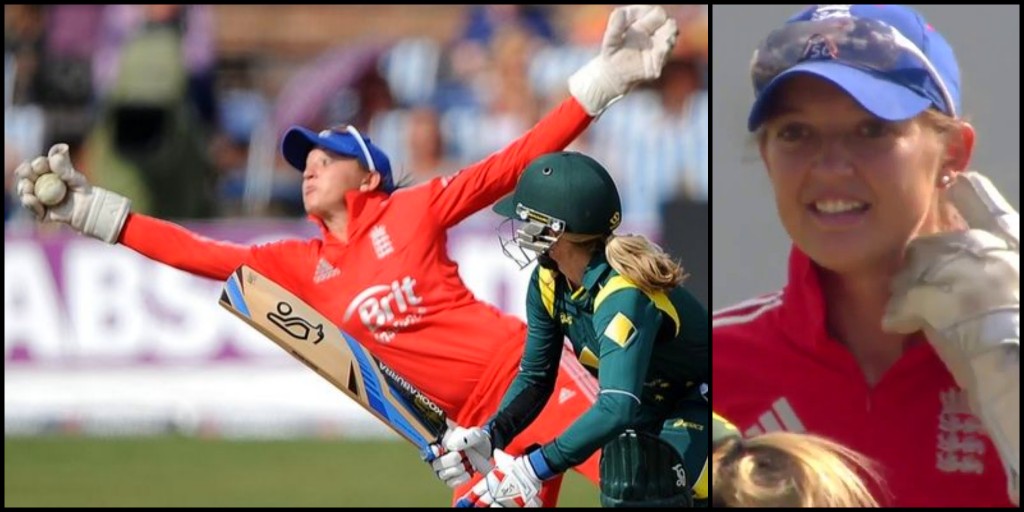 Best Catch By A Wicket-keeper

In 2013, during Australia women’s tour of England, Sarah Taylor displayed an extraordinary keeping skill. In 3rd ODI match, she took an outstanding catch to dismiss the Australian skipper Jodie Fields. It all happened when she played a reverse sweep on spinner Daniell Hazell’s ball. The batsman connected the ball sweetly. Wicket-keeper Sarah Taylor was close to the stumps at it was a spinner. She had hardly half a second to understand batsman’s actions.

However, Sarah Taylor reacted to it extraordinarily. It was her quickness that she pounced on the ball like a cheetah. She grabbed one of the greatest catches in history. It is never easy to react to batsman’s actions this quickly when you are close to stumps.

Recently, Sarah Taylor retired from international cricket. 30-year old is having an anxiety disorder and in order to fight with it, she has taken this decision. Taylor made her debut for England at the age of 17 in 2006. She has played 121 ODIs, 89 T20Is and 9 tests and have scored 2958, 2175 and 295 runs respectively. She was the member of 2009 and 2017 women’s world cup champion England teams.

In 2015, she played for Australia’s domestic men’s team Northern Districts and became the first woman to play men’s A Grade cricket. On playing men’s cricket she had said, “It was exciting. It was so nerve-racking. It was probably one of the toughest things I’ve ever done on a cricket field, but I can walk away and say I somehow enjoyed every moment of it, including the media hype.”