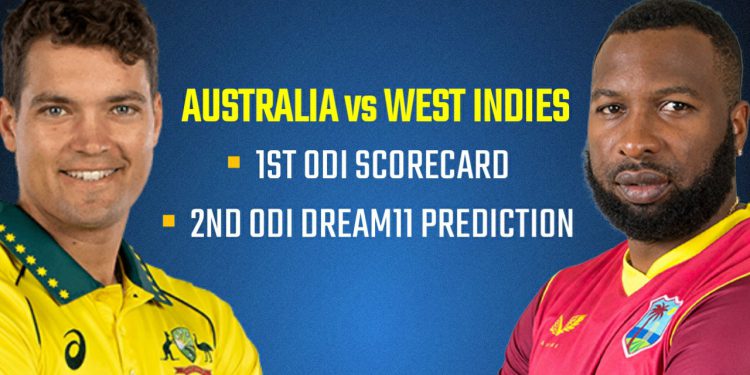 After trashing the Australian team 4-1 in the T20 series, the Windies are taking on the Aussies in a 3-match ODI series. The entire series will be played at Kensington Oval Stadium, Barbados. The first match of the series was played on Tuesday which was convincingly won by the Australian team. In this article, we’ll cover the Dream11 Prediction for the 2nd WI vs AUS ODI and the Last match Scorecard.

Though the 1st WI vs AUS ODI was a rain-affected match, it did not affect much of the match-time as only 2 overs were reduced from the match. The match was reduced to 49 overs per side. Australian skipper, Alex Carey after winning the toss, decided to bat first.

The Captain himself was the top scorer of his side. He played an innings of 67 runs in 87 balls. Ashton Turner played a handy knock of 49 and made a good partnership with his captain. Hayden Walsh was impressive with the ball, he took 5 wickets for West Indies. Below are the Scorecards of the WI vs AUS 1st ODI Match.

In the second innings, no batsman could hold onto the crease, other than the Windies captain, Kieron Pollard. Pollard made 56 runs in 57 balls. The only other batsman who could reach the 20 run mark was the tail-ender Hayden Walsh. Mitchell Starc and Mitchell Marsh both grabbed 3 wickets each.  Below is the scorecard of the 2nd innings of the WI vs AUS 1st ODI Match.

Shai Hope might play in the 2nd ODI as he didn’t get a chance in the 1st ODI.

The debutants of the 1st ODI, namely, Wes Agar, Josh Philippe, and Ben McDermott will most likely retain their spots. The Australian team might remain unchanged as they won the 1st ODI.

Dream11 Prediction for the WI vs AUS 2nd ODI match

The pitch for 2nd ODI is expected to help both batsmen and bowlers. Ben Mcdermott who made his debut in last West Indies vs Australia match might turn out to be a key player today. He batted as opener and spent enough time on the crease. Alex Carey will be a must pick choice under wicket-keeper’s bracket. Also, Mitchell Starc is in form and not picking him in the Dream11 team will be a blunder. Considering the probable playing XI of both the teams, here are the Dream11 Fantasy teams we suggest for the WI vs AUS 2nd ODI match.