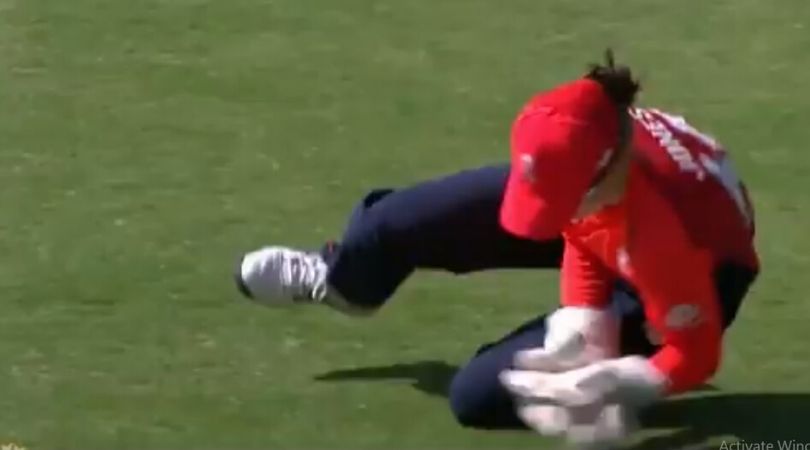 Currently, Indian women cricket team is on the tour of Australia for tri-nations T20 series against England and Australia. Meanwhile, during the first match of the series between India-W and England-W, Indian batter Samriti Mandhana luckily survived after a controversial catch by English wicket-keeper Amy Jones’.

It all happened in the first t20 match of the ongoing tri-nations series at Manuka Oval in Canberra when Mandhawa edged a delivery from England seamer Katherine Brunt to their wicket-keeper Amy Jones. Initially, everybody was thinking that Amy took a brilliant catch diving to her left, however, the umpire’s had to check as the ball bounces back from her hands.

The official twitter handle of the 7cricket has shared the video of the incident on their twitter handle. They have added the video with the caption, “It appeared Amy Jones had taken a cracking catch, and it was originally given out… But closer inspection reveals a different story and the decision is overturned.” Here we are attaching the video of the same at the below of this article.

Earlier in the women cricket match, after winning the toss India decided to bowl first at Manuka Oval in Canberra. Meanwhile, in the first innings, England team could manage to score 147-7 at the end of the 20th over. From the English team, Heather Knight was the top scorer who scored 67 off just 44 balls. Thanks to her innings, England managed to set a target of 148 in front of the Indian batting side.

In the reply, Team India chased down the score on the third ball of the 20th over. From Indian side skipper, Harmanpreet Kaur scored unbeaten 42 runs off just 34 balls and helped the side to win the match.

It appeared Amy Jones had taken a cracking catch, and it was originally given out…

But closer inspection reveals a different story and the decision is overturned 🧐 #ENGvIND pic.twitter.com/wrWP5er4Z8