The Indian wicketkeeper took a dig at South Africa's captain Dean Elgar after he took a long time to discuss the DRS call. 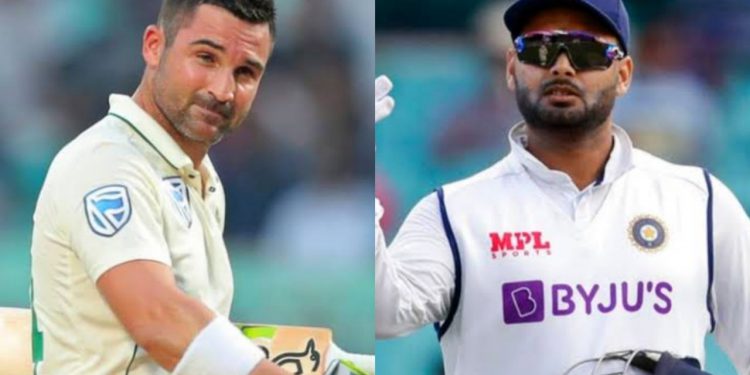 Dean Elgar’s DRS decisions have not turned out the way he wanted them to be in the ongoing series against India. Most of the captain’s calls have gone against the team and other times, he was too late to decide whether to take the review or not. In an incident on the 3rd Day of the second Test, Dean Elgar and Keegan Petersen were too late to decide about taking the review. Immediately, Rishabh Pant mocks Dean Elgar for not giving a nod to Petersen’s DRS request.

The Indian bowlers had to wait and bowl patiently for their two wickets as the South African batsmen dropped the anchor and kept batting with focus. It was Shardul Thakur who claimed the first wicket and Ashwin who finally broke the second partnership. Petersen was given Out LBW and he discussed about taking the review with his captain who took a long time to discuss. Following their decision, Rishabh Pant mocked Dean Elgar for not supporting his teammate’s call.

On Day 3, team India was all-out on 266, giving a competitive target of 240 to the Proteas. The South African openers made a solid start and notched up a 47-run partnership for the first wicket. For the second wicket, the Proteas made 46 runs before Ashwin claimed Petersen’s wicket. Dean Elgar and Keegan Petersen thought about a review, but the former didn’t give a nod to the latter.

I loved the way rishab pant said this during the match when petersen got out😅😂🤣😂😂😂🤣😂😂 pic.twitter.com/vqeEIlT3xG

The DRS timer ran out before both the batsman could decide to take the review and Rishabh Pant took this opportunity to mock Dean Elgar for not supporting his teammate in the DRS call. The Indian wicketkeeper was caught on the stump mic saying, “Zabardast captain hai ye, apne baare me sochta hai ye bas.” Which translates to in English; “Fantastic captain he is, thinks only of himself”.

After the end of the play on Day 3, South Africa is slightly ahead of the Indian team as they only need 122 runs with 8 wickets in hand. The Indian team needs to take early wickets in the first session or they will be out of the game. On the other hand, the Proteas will look to play cautiously and try to level the series 1-1.