Team India sealed the T20I series against New Zealand by 1-0 as the third T20I in Napier resulted in a tie as per the DLS method. 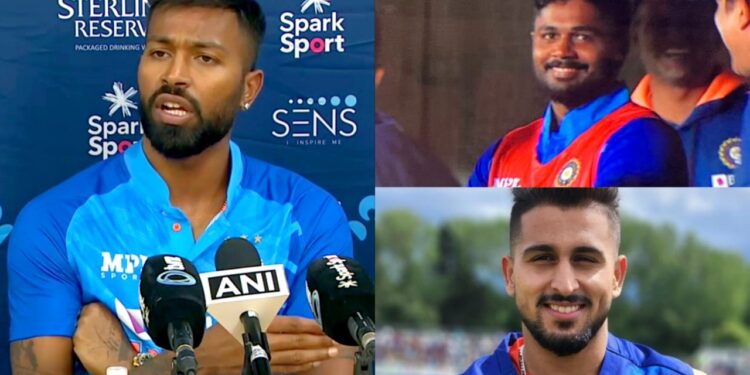 Team India sealed the T20I series against New Zealand by 1-0 as the third T20I in Napier resulted in a tie as per the DLS method.

After the victory, India’s stand-in captain, Hardik Pandya, was asked about Sanju Samson and Umran Malik’s absence from the playing XI to which he had a straightforward answer.

Everyone will get their chances in the long run: Hardik Pandya

The three-match T20I series witnessed one completely abandoned game due to rain and a game that was called off midway. This must have forced the Indian Team to give opportunities to limited players and they were criticized for excluding Sanju Samson and Umran Malik from the playing XI. Indian skipper Hardik Pandya too was asked about their exclusion in the press conference after the third T20I.

Both Umran Malik and Sanju Samson have been a regular part of the Indian squad for quite some time now. However, they’re not getting enough games to prove their worth. Team India preferred Dinesh Karthik and Rishabh Pant over Sanju Samson for the wicketkeeper spot in the T20 World Cup but both of them disappointed the team as they couldn’t play any major role in the limited opportunities that they got. Team India must be keen to give Sanju enough opportunities considering the next T20 World Cup.

On the other hand, with Bumrah getting injured, the Indian team lacked a genuine pacer in the squad. Umran Malik is a serious contender for that role as he’s arguably the fastest pacer in the Indian setup right now and must be groomed enough before fielding him in a major event.