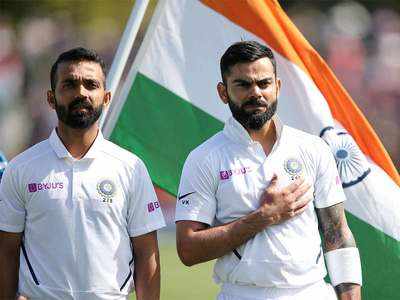 Team India’s 227-run loss to England in the first game of the four-match series has opened quite a few avenues for introspection and dissection. After being unceremoniously humbled down by their English rivals in Chennai, the Virat Kohli-led side would be eager to do well in the next match, which will also be played on the same venue.

However, a big talking point leading up to the second test is whether the current Indian team has the correct leadership combination. Ever since stand-in captain Ajinkya Rahane completed a fairy-tale 2-1 away win in Australia; a large portion of fans have strongly advocated for him to take over as the permanent captain. And given how comprehensively the team went down in the last match, those calls only seem to be getting stronger.

Fans expected that with Kohli’s return, the team’s fighting spirit would get buoyed even further; both on the batting and tactical side of things. Instead, the Indian think-tank opted for some bizarre left-field selection calls that had an adverse effect on the team’s bowling strength. An inexperienced bowling attack, featuring the likes of Shahbaz Nadeem and Washington Sundar, ended up conceding 578 runs in the first innings; a score that proved to be unnaturally daunting for the India batting lineup. Even with Kohli back in business.

In fact, in the post-match interview that followed, Kohli lamented on the team’s physical demeanor in the first innings. “Our body language and intensity weren’t up to the mark. The second innings was much better. We were better in the second half of the first innings with the bat, not the first four batters,” he had said.

“You won’t get any masala from me”- Ajinkya Rahane

Vice-captain Ajinkya Rahane recently got questioned about the aforementioned intensity and body language issue. But Rahane’s reaction to the same was unnaturally defensive; he went as far ahead as to inform the journalist that they weren’t going to get any ‘masala’. Further, he defended Kohli’s stature as the de facto leader of the team.

“Yes, it’s true, sometimes players don’t have energy on the field. It’s not because the captain changed. If you’re looking for masala, you’re not going to get it here,” he said.

In a way, Rahane’s response seemed to be a way to repay Kohli’s faith after he had defended him in a press conference earlier. “You won’t get the response you’re trying to get from me,” he had said; while adding that Rahane served as one of the most valued members of the team.