Yuvraj Singh Suffers Back Injury In The Eliminator Game 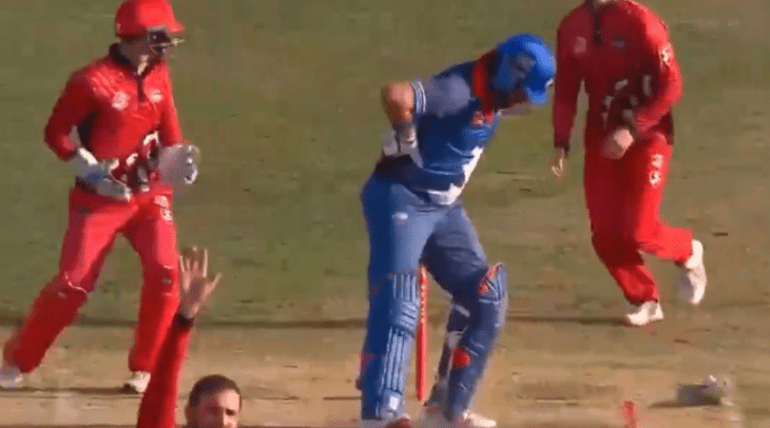 Yuvraj Singh Suffers Back Injury In The Eliminator Game

Toronto Nationals skipper Yuvraj Singh has sustained a back injury in the eliminator game against Winnipeg Hawks. Despite Nationals scored a stupendous total of 238 for five, they failed to qualify for the next round as they lost by two runs through DLS method.

After Rodrigo Thomas and Henrich Klaasen powered the team’s score with a 137-run partnership for the second wicket. Yuvraj came to bat only for seven balls as his back pain continued and he had to retire hurt for the score of 8.

Yuvraj, who had missed the previous game against Montreal Tigers before he received an injury against the same team in their final round one game. Yuvraj went for a sweep-slog against Fawad Ahmed and from there on the pain has not relieved him.

Yuvraj later came to field in the second innings but he wasn’t seen leading the team and he gave Kieron Pollard the responsibility to captain the side.

Hawks were playing at 201 for five with both JP Duminy (85) and skipper Rayad Emrit (32) batting at the crease at 17.1 overs.  Umpires had to call off the match due to bad light.

JP Duminy was adjourned as the man of the match for his splendid 85 runs off 41 balls, his innings laced with eight fours and five sixes.

In the earlier part, Henrich Klaasen played a classic knock as he was unbeaten on 106 with the help of 11 fours and five sixes. Unfortunately, Toronto Nationals lost by 2 runs as 199 was needed at that stage to win.

Winnipeg Hawks will face Brampton Wolves in the qualifier 2 to decide who will face defending champions Vancouver Knights in the finals on Sunday.

Yuvraj is likely to play in the inaugural Euro T20 Slam which starts from August 30. The southpaw amassed 153 runs from six matches at an average of 38.25.