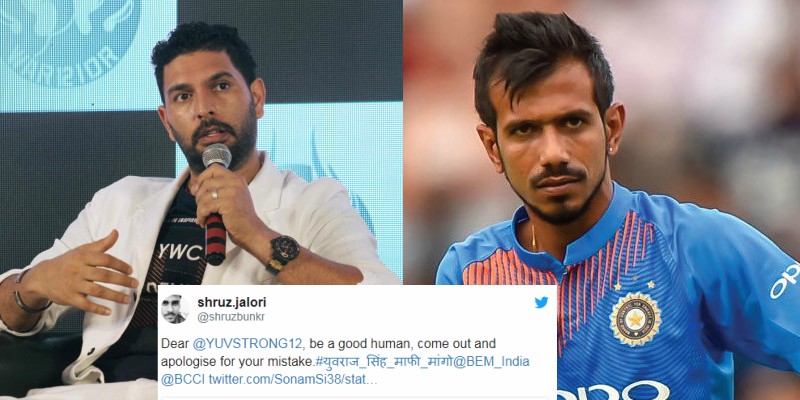 Yuvraj Singh has landed himself in yet another controversy after passing an uncalled for and stupid comment over Yuzvendra Chahal’s recent video. Chahal has been one of few cricketers who during this lockdown has taken to social media in bringing out his funny side by uploading humorous performances, dance acts, mimicry and almost everything that’ll leave his fans ROFL! In one of his many acts, Chahal can be seen leading a dance with his family members following him. The entertaining act garnered immense praises for the Chahals and their efforts. While fellow cricketers are already aware of Chahal and his humor, the act just came as an added surprise to everyone since it had his family in it too.

However, on a recently leaked chat between Rohit Sharma and Yuvraj Singh, the latter can be seen passing a castiest comment on Chahal’s act. Something which has left fans and fellow netizens fuming. Yuvraj can be heard saying,  “Yeh b***gi log ko kaam nahi hai yeh Yuzi aur isko (Kuldeep).” And Sharma on the other hand goes on to comment, “Yuzi ko dekha kya video daala hai apni family ke saath. Maine usko wahi bola ki apne baap ko nacha raha hai, pagal toh nahi hai tu.” Although it doesn’t seem intentional, it triggered controversy. In no time, citizens flooded the video with messages of hate and anger, even demanding a public apology from the cricketer for the comment, while some even went on to question his upbringing.

With all due respect for their contributions towards the game, comments like these from cricketers just doesn’t go down well. On a lighter side, we hope the Chahals aren’t affected by this uncalled for stupidity, and they continue to do what they’ve done best – Entertain all!