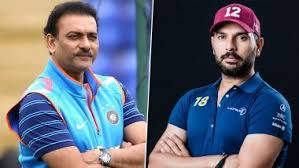 “Dhoni finishes off in style, a magnificent strike into the crowd,” these words of Ravi Shastri became immortal after then Indian captain MS Dhoni hit the world cup winning six. It has been 9 years since India has lifted their second World Cup title. But it seems as if it happened yesterday.

On Thursday, 2nd April, India celebrated the 9th anniversary of 2011 World Cup win. The Indian cricket team which had led India to the title win received the congratulatory messages from the fraternity and fans. MS Dhoni got all the glory for his 91-run knock and six which sent millions of Indians into jubilation. Gautam Gambhir’s 97-run knock was equally important and India would not have made to the final without Yuvraj Singh’s all-round performance throughout the tournament.

However, Ravi Shastri forgot to mention MS Dhoni and Yuvraj Singh in his congratulatory message yesterday. Shastri posted the video of Dhoni’s six with a message tagging Sachin Tendulkar and Virat Kohli. He wrote, “Many Congratulations Guys! Something you will cherish all your life. Just like we from the 1983 group #WorldCup2011 – @sachin_rt @imVkohli.”

Yuvraj Singh who bagged the man of the tournament award in WC 2011 didn’t seem impressed with current team India coach. Yuvraj took a cheeky dig at Shastri tweeting, “Thanks senior! U can tag me and Mahi also we were also part of it,”

Thanks senior ! U can tag me and mahi also we were also part of it 😂

Later Ravi Shastri was effusive in praise of Yuvraj Singh. He replied to Yuvraj, “When it comes to World Cups, you are no Junior. Tussi Legend Ho,” In the past too Yuvraj Singh has taken some dig at Indian coach for his decision. Yuvraj was never a fan of Ravi Shastri’s yo-yo test system for selection in the Indian team. The tactics of Shastri has always disappointed the former Indian all-rounder.

When it comes to World Cups, you are no Junior. Tussi Legend Ho @YUVSTRONG12 ! 🤗 https://t.co/bnZHTyFd8x