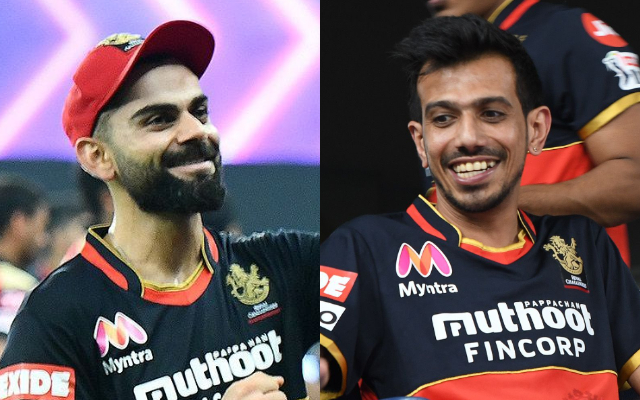 Grit and passion have always been a part of Virat Kohli’s game; at times well blended with a pinch of aggression. This comes in a leader who’s always trying to bring out and expect the best from his teammates, if not often seeing a few of them at the receiving end of his “aggressive outburst”. Yuzvendra Chahal was one such who received a earful from Kohli after dropping a catch.

Chahal’s Drop Catch Leaves Kohli Fuming
A demanding leader, that’s what players expect from Virat Kohli as a captain. And he’s rightly been so for he’s set high standards in his own game. During the closely fought encounter between the Royal Challengers Bangalore and Delhi Capitals, the former was looking to pick wickets and apply pressure on the Capitals’ runchase.

An opportunity to scalp another wicket came in the penultimate over of the Capitals’ inning. Mohammad Siraj’s short-pitched delivery nipped back into batsman Marcus Stoinis who got into a shorthand pull.

The ball headed straight to Chahal stationed at mid-wicket. But the end of it saw the ball sail over his head for a six after a failed catch attempt. This left captain Virat Kohli fuming and vent verbal slur in frustration at Chahal. Perhaps a wicket could have pegged back the run-chase.

Fans Get Into A Hilarious Groove On Twitter
The drop catch and Chahal’s attempt at it were instantly trending on social media. Chahal’s always been agile in the field but on this occasion just couldn’t get hold of the ball; which by his captain’s standards should have been caught. With Kohli left fuming, fans still saw a fun side to the drop catch. A fan remarked that it’s Chahal and not an AB de Villiers or a Faf du Plessis or even Ben Stokes to pull off those blinders on the boundary line. On a different tangent, some fans trolled former cricketer Gautam Gambhir for his earlier post in which he praised Chahal for being a brave bowler. Ironically, Chahal went wicketless in the game.

Capitals Win Sees Them Seal Playoffs Birth
Delhi Capitals notched up a much-needed and deserving win over the Royal Challengers Bangalore, thereby sealing their place in the IPL 2020 playoffs. After finishing second, Delhi Capital will now go on to face table-toppers Mumbai Indians. As for the Royal Challengers Bangalore, even in defeat, they still managed to make it to the playoffs and will feature in the Eliminator either against Sunrisers Hyderabad or the Kolkata Knight Riders.