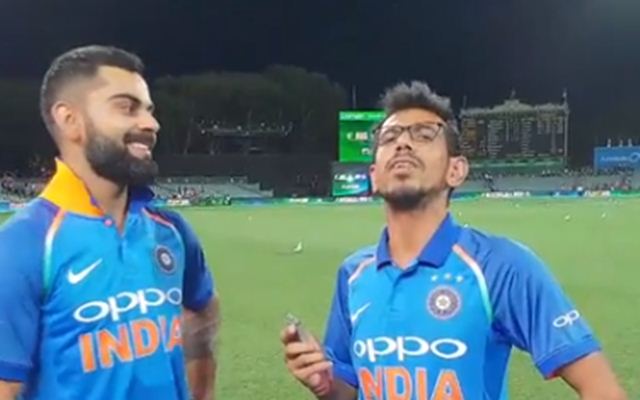 Yuzvendra Chahal Takes A Dig At Indian Skipper Virat Kohli? : Rohit Sharma after batting in the middle-order for a long time, finally, made his debut as the opener in the test. From long-time experts were asking why Team India is not giving chance to veteran Rohit Sharma as the opener in the Test. Despite having good form in ODIs and T20s. However, selectors and team management were thinking differently.

And now when Team management has given chance to Rohit as the opener in Test, he has grabbed the opportunity so nicely. And now everybody praising Rohit Sharma’s first innings as the role of opening batsmen. Over the Internet, the congratulation messages to the hitman are floating.

But a congratulating tweet from Yuzvendra Chahal has made fans to believe that he was taking a dig at the skipper. Actually, Chahal has tweeted one photo of Rohit with the caption ‘Real G.O.A.T’, and as soon as the photo uploaded, it was enough for the fans to come up with different theories. The meaning of the ‘G.O.A.T’ is Greatest of All Times.

Even some fans are thinking that Chahal uploaded this picture because Kohli is not giving the opportunity to him. Recently, during the T20s series, Virat Kohli in the press conference said that team has the need of bowlers who can bat too.

Here are some tweets from Fans

Yes Virat is only a career destroyer of young players like u .