The ongoing T20 Blast season is nearing conclusion. On Tuesday, the table-toppers of South group Surrey and Somerset came head-to-head. 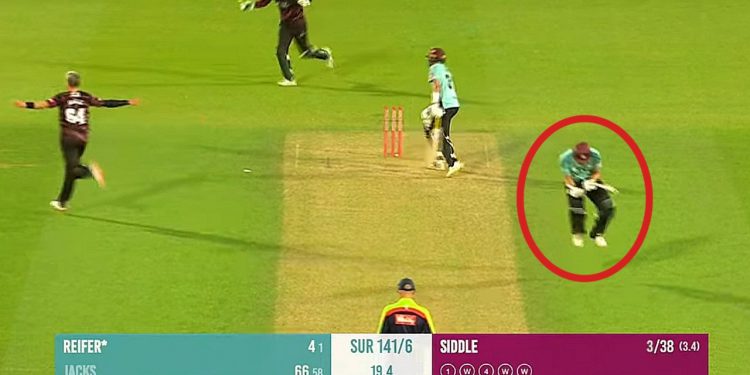 The ongoing T20 Blast season is nearing conclusion. On Tuesday, the table-toppers of South group Surrey and Somerset came head-to-head. Surrey won the toss and invited the opponents to bat first. Somerset who suffered early blows in the innings managed to post 144 on the board with the help of Tom Banton’s 39.

Chris Jordan-led Surrey started their innings well as openers Will Jacks and Jamie Smith put a 49-run stand in 7.2 overs. However, the run-rate pressure started building on them as the middle order tumbled. They needed 24 runs off the last two overs but the good thing was Will Jacks was still on the crease.

Peter Siddle’s dramatic last over in Surrey vs Somerset match

Jacks and skipper Jordan eased the pressure by collecting 15 runs in the 19th over. Now it was all up to 37-year-old Peter Siddle to defend 9 runs in the last over. And Siddle did well by giving a single on the first ball and moving a set Will Jacks to the non-striking end. In the second ball, Jordan was caught by Lammonby as the batter attempted to hit a six.

Now 8 runs were needed on 4 balls and Nico Reifer’s boundary off his very first ball again moved the weight on Surrey’s side. But then things got interesting as Siddle struck two wickets in the next two balls. Will Jacks was seen in extreme frustration on the non-striking end.

Now 4 runs were required on the hat-trick ball. As expected the bowler went for another yorker but couldn’t execute it perfectly like the previous two deliveries. It was a gift for the tailender Conor Mckerr who hit it towards the cover region and collected a match-winning boundary. Will Jacks was named Player of the match for his unbeaten 66 off 58 balls. Here’s the highlight of the final over of Surrey vs Somerset match.

9️⃣ runs to win from the final over…

What happens next is just 🤯#Blast22 pic.twitter.com/PMI0HXMdw9

ALSO READ: Jason Roy reveals why he pulled out from IPL 2022 at the last moment

It was the 9th win of the season for Chris Jordan-led side in 10 matches. So far, Surrey are unbeaten in the tournament and have already qualified for the quarter-finals. A win yesterday would have nearer Somerset from the final-8 position but they have got four more matches to play. Currently, Somerset are standing at 2nd on the points table (South Group) with 12 points in 10 games.